Well, well. The second comp. ticket concert in a row. And it’s also a show attended without John. John wasn’t interested or was otherwise busy.

You will notice that from here on there won’t be many shows that I saw with John. I would be moving into John’s basement the following spring (Just in case you’re all wondering, no, we aren’t gay. We weren’t a couple. Let’s move on.) and, once I had started living in John’s house, John and I barely hung out together. Even before I had moved in the trend away from each other had begun. We’re still friends.

I wasn’t sure I was going to go when I’m mentioned, at work, that I had a couple tickets to the upcoming Burning Spear show. A coworker, Mike, was big into the reggae so he jumped at the chance to go.

I knew only one song by the band. The song was Ku Klux Klan. I had seen them perform it in the very influential (for me and John) concert film, “Urgh! A Music War”.

Despite the fact that I knew none of the material, I had a blast. It was a fun show.

Everyone at First Avenue was grooving to the music. And I do mean everyone! Everywhere I looked in the packed club were people dancing. On the main floor, off to the sides, in the back, upstairs – everywhere!

What a great time and John missed it.

Yep, I went to this show alone. I’m not sure why John didn’t go. It is unusual that John wasn’t there, The Fall being one of his favorite bands. It’s possible that the concert happened while John was in Europe.

So, I ventured in alone and stood right up at the front of the stage. The ultra-cool Mark E. Smith paced the stage while delivering his unique vocals. He was also fiddling around with a small tape player. It appeared that he was trying to get it to play something through his microphone. Apparently, it wasn’t working so, eventually, he gave up.

Another good show that John missed. 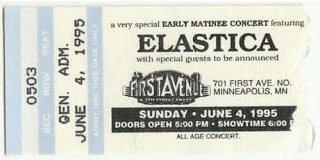 I went with a couple of other friends of mine, Joel and Gary. I knew Joel better. He and I had worked together at Wendy’s for years and did a lot of hanging out together. Gary was Joel’s roommate and an all around good guy.

As we waited for the band to play, I caught the eye of a young woman. She spotted the shirt I was wearing. It was a white t-shirt with a large depiction of the Canadian flag. She asked if I was from Canada. I answered honestly (as my mother taught me to do) and said, “Nope. I just like the flag.”

She gave me an “oh” and quickly moved on.

Joel and Gary jumped right on me. They said I missed a golden opportunity to hook up. I should have lied and said I was Canadian.

I don’t operate that way. I didn’t then, I don’t now (my wife would object). I knew she would figure out I wasn’t from Canada. I guess I blew it, eh?

I never did pick up any women at First Avenue.

Heavily influenced by Wire and other 70’s era punk bands, Elastica was one of the last great bands to pogo to. And I pogoed myself to near exhaustion. It didn’t take long, either, because I had gotten a little bit older and I was feeling it.

I avoided the slam dance pit. I didn’t feel up to it at my ripe old age of 30. So I stayed off to the side and pogoed away. Much to the chagrin of the young woman standing near me. My dancing and the moving crowd caused me to bump her a couple of times. She wasn’t pleased and she let me know it. I told her she should expect a little bumping standing where she was and that I was from Canada. (Ok, I didn’t say that last bit about being from Canada.)

Oh well, I never did pick up any women at First Avenue.

It was a great show and they had a special announcement for us. They were going to be filming the concert sequences for their video for the song Stutter. They actually played the song twice. Once during their regular set and again in their encore.

They told us about the filming just before they played Stutter the second time. They told us to go crazy and show a lot of enthusiasm. They wanted the audience to be really revved up and we obliged.

So, if you watch that video on the YouTube, you now know that part of it was filmed at First Avenue and I was there.