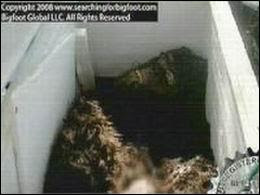 I haven’t addressed this fully in this blog, but I am a skeptic. I’m a member of the Skeptic’s Society which essentially means that I subscribe to Skeptic magazine. You can check out http://www.skeptic.com to learn more about the magazine and what it means to be a skeptic.

As a skeptic, I know it’s important to not be a cynic. I try not to dismiss unusual claims out of hand, which I admit can be difficult at times. I do my best to look at the evidence, whatever it is, and then make my judgment. However, even after I come to a conclusion on some extraordinary claim, I remain open-minded toward more evidence which might cause me to change my position.

“Extraordinary claims require extraordinary evidence” is the Skeptic’s motto. It’s something I keep in mind every time an event like this crops up.

So, this past week, two bigfoot hunters from Georgia, Matthew Whitton and Rick Dyer, made quite a media splash with their extraordinary claim of discovering the carcass of a bigfoot. They further claimed that a “scientist” had flown in from Texas to have a look at it and was amazed. Whitton and Dyer said that everyone would be amazed when they made their official statement at a press conference to be held Friday August 15th.

The press conference was held and, from what I heard of it, I have to say I’m underwhelmed. Especially since a few interesting items came to light during the week leading up to that press conference.

One item was the photograph of the body stuffed in a freezer. It’s a pretty unconvincing photo. The “find” looks like a blob of brown fur with a face. I’m no expert, but I can see no indication of a skeletal structure or musculature. Things I would expect to see when looking at a dead primate of any sort. Besides, a fairly nondescript photograph could hardly be considered extraordinary evidence.

The photo became even less convincing when it was demostrated how much the body resembled a sasquatch costume that can be purchased online for your next Halloween party.

Whitton and Dyer posted on YouTube an approximately ten minute long video promoting their find. They never show the body in the video, but they do bring in a “scientist” to examine the body. Mind you, that’s how the fellow refers to himself. He calls himself a scientist, not a primatologist or zoologist or biologist or meterologist, just “I’m a scientist.” Very convincing.

This “scientist” was a red flag that couldn’t be resisted by what Whitton refers to, in their follow up video on YouTube, as stalkers. What Whitton calls stalkers, I call fact checkers. In any case, it was discovered that the scientist was really Whitton’s brother, who is not a scientist. These bigfoot hunters try to laugh off the fake scientist, but they maintain the body is authentic.

The initial YouTube video promoting their discovery has other interesting and telling features. As I stated earlier, the body is never shown, but they do manage to mention their website several times. Whitton claims that, unlike other bigfoot websites, they aren’t in it for the money. Dyer claims the their website is the best because they have a body. Well, I’m not so sure about that, Mr. Dyer.

There’s also a strange non-sequiter segment popping up two or three times in the first YouTube video. It’s an older fellow brandishing a very large knife and repeatedly shouting, “Airborne! Yarrrraghhh!” Try as I might, I can’t figure out what this old Airborne enthusiast has to do with hunting bigfoot.

At the August 15th press conference was a third fellow, Tom Biscardi. Biscardi is a self-proclaimed bigfoot expert and the host of an internet radio talk show dedicated to stories about bigfoot sightings and such. And it was Biscardi that the bigfoot hunters went to first with their discovery. I find it interesting and very telling that Whitton and Dyer went to a fellow bigfoot enthusiast and not to the local university or zoo with what could be the scientific find of the century.

It’s also very telling that the trio seem reluctant to show us the body. They want to hand-pick scientists for the examination. If this was the true discovery of the elusive bigfoot, I would have to believe that these fellows would be more than willing to turn the carcass over to scientists for proper study. They wouldn’t be stonewalling.

This whole episode looks more and more like the alien autopsy or the Raelians’ cloned human media follies. My conclusion at this point is that this is much more likely a publicity stunt meant to promote Whitton and Dyer’s website and Biscardi’s internet radio program. They’ve all recieved a lot of pub, but, I think, they end up looking foolish.

I have my doubts as to the existence of bigfoot. The fuzzy photographs, the shakey videos, the easily faked footprints, the anecdotes and the fact that people having been searching for this undocumented primate species for about 80 years and still haven’t found it indicate to me that bigfoot probably isn’t out there. Further evidence may prove me wrong, but if these two nimrods have really discovered bigfoot, then I’m a monkey’s uncle.

According to the Fox News website, it appears the skeptics were right, again. Whitton and Dyer, it turns out, were attempting to con Tom Biscardi as well as the rest of us. Only it’s Biscardi who is out an undisclosed amount of money.

I’m afraid I gave the impression that Biscardi was guilty by association in perpetrating the hoax. I apologize to Mr. Biscardi. I’m sure this episode hasn’t lessened Tom Biscardi’s belief in the existence of bigfoot. I hope, however, that if there is a next time Mr. Biscardi turns immediately to the proper scientific experts for validation of the find before shelling out any money.

It appears that my apology to Mr. Biscardi may have been premature. New information on FoxNews.com shows that Biscardi is well known among cryptozoologists and cryptozoology enthusiasts. He is not highly thought of and some are certain that he is just as much a part of the hoax as Whitton and Dyer.

I don’t know if he is part of the con or not, but this event just goes to show the importance of critical thinking.

If you’ve been following this story you know that it’s become very sad. Very sad. It was a joke to lighten the mood of America. That’s what Rick Dyer is now claiming. It was just a joke that got out of hand.

And a correction needs to be noted. I had Matthew Whitton and Rick Dyer mixed up. I have corrected the text above, but I want to be open with my readers (if there are any) about making that change.