It should be well noted here that this was not a date. Paytee and I were just friends. Paytee was a woman I had worked with in 1993-94. We were both laid off from that job and went our separate ways.

It would have stayed that way had we not met up again at a mutual friend’s party. We realized that we enjoyed each other’s company and we started hanging out together. This concert was one of our hanging outs. Again, it wasn’t a date.

There’s not much to tell. I had a couple comp. tickets for the show so we went. Paytee didn’t think much of the band, so we left.

I went to this one alone. Frank Black had some pretty good solo material and I wanted to check him out. Besides, I had never seen Pixies and this might be as close as I would get. Incidentally, he didn’t play any Pixies tunes.

He was really having a good time playing up the “rock god” thing. He’d stand at the front of the stage, fists on hips ala Superman, while nodding his approval as the adoring crowd cheered. I’m sure it was all an act. At least, I hope it was.

This wasn’t an all-age show. You had to be 21+ to attend. So, I couldn’t figure out how an obviously underage kid could be there jumping around on the dance floor.

When the show ended, I asked the child how he got in. He told me it was his mother who brought him. His mother! Apparently, a parent can bring their kid to a show at the First Avenue. I’m not sure I like it, but it’s legal.

I just learned that my future wife had also been to this show. We didn’t know each other yet, but we were there together. Awwwww.

Finally! After more than 13 years since John and I weren’t able to see the band because of a snowstorm, I finally got to see Cheap Trick play live. They had been a favorite band of mine for years and they were worth the wait. I’m sure they had come through town many times in those 13 years, but this was the time I saw them.

They were very good. It was easy to tell these guys were old pros at the rock’n’roll. Very professional and very fun.

Rick Nelson was funny and still quite the showman. He must have brought ten guitars including the four (or was it five) guitars in one and the double guitar made to look like a cartoon of himself. He threw out an album jacket when they played Surrender, a custom at Cheap Trick shows. He also threw out a couple dozen guitar picks. Each emblazoned with his mug. I snagged one. 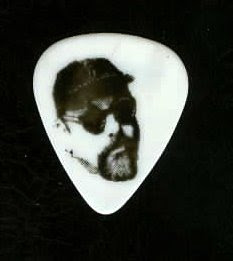 The rest of the band were right on. Robin Zander’s voice might have lost a little of its range, but he was still great. He still had the rock star thing going, even if he tried to hide it a little. I say that because during an instrumental section of a song, he snuck over to the side of the stage, out of sight of most of the audience, and took a great big swig from a bottle of Jack Daniels. Rock’n’roll!

The opening band, Flipp, was impressive as well. A local band with a sort of a Kiss meets The Sex Pistols thing except they are better musicians. Flipp generates a love/hate reaction. I thought they played really well and had some good songs and were fun, as did most of the audience. But some audience members disagreed.

When Rick Nelson thanked Flipp for warming up someone shouted, “Flipp sucks!”

That surprised Nelson. “Really? They did?” was his reaction.

Anyway, I was most impressed when at the end of their set Flipp’s lead singer got behind the drum kit and played Back In Black. Big deal, right? I should mention that he played guitar and drums at the same time. Sure it’s a gimmick, but it was still impressive.