Cold Open: Ode To October And The Great Pumpkin

This was a slightly edited replay of a cold open I did last year.  I’m thinking this might become an October tradition.  It chronicles a few of the things I like about October, especially ‘It’s The Great Pumpkin, Charlie Brown’, but I did forget one important October event…
The World Series

How I forgot to include the World Series in my ode to October, I don’t know.  Well, I rectified that by talking about this year’s Fall Classic.  It don’t look good for the Detroit Tigers.  They are three games down to the San Fransisco Giants.  I talked about Pablo Sandoval’s achievement of hitting three home runs in one game in the World Series.  A feat that has only been done four times before in the history of the series.  Babe Ruth (he did it twice!), Reggie Jackson, and Albert Puljols have done it.  And now they can add “Panda” to the record books. 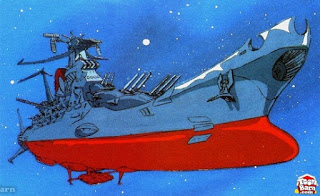 My son and I have been watching the animated series Star Blazers on YouTube and I gave my thoughts on the show.  It’s silly fun and its regard for science is nonexistent.  They think that Mars is THOUSANDS of light years away from Earth!  Um, not exactly, but who cares?  Just go with it.

Learn about our Star Blazers here.
Stuck In The 80s Podcast Come To An End?

For seven years, Steve Spears has been producing a podcast and blog dedicated to his favorite decade, the 1980s, called Stuck In The 80s.  Along with his irreverent and very funny cohost, Sean Daly, he would bring us news and interviews and general talk about the pop culture of that decade.  There were other cohosts over the run of the show, but Sean Daly’s zaniness was a perfect fit for Steve Spears’ more subdued persona.  It was very entertaining.

That’s right.  Was.  They just did their last show.  Steve Spears is taking on a new job and will not be able to produce the show as he had been doing.  He was making the show through his former place of work.  He promised he will try to continue doing the podcast in some form, but we’ll see.  The blog will continue for at least the next three months.

The final (?) show featured call-ins by long time SIT80s fans and a couple recorded messages (one by a Dr. Dim, ever heard of him?) and lots of memories of the show.  There are 270 plus episodes to listen to on iTunes, so if you haven’t heard it there’s lots of fun awaiting you.

The 10 Mill Is Probably Safe

There’s a new “reality” show on the horizon.  Another one?  Yep, just what we need, right?

Spike TV will be producing another show documenting the attempt to prove Bigfoot really exists.  The contestant who offers “irrefutable evidence” the proves the elusive creature does romp around the woods of just about every state in America will be awarded $10 million dollars.

Given that people have been searching for the cryptid for decades and the areas where it might be are shrinking and the fact that everyone carries a camera with them everywhere they go and no bigfoot has yet been found, I’d say Spike TV’s $10 million is safe.

20th Century Fox
The last really excellent comedy by Mel Brooks.  It’s very funny.  Co-written with the movie’s star, Gene Wilder, this classic comedy borrows from ‘Frankenstein’, ‘Bride of Frankenstein’, and ‘Son of Frankenstein’.  All three of those films featured the great Boris Karloff as the monster.  As I said, ‘Young Frankenstein’ is terrifically funny and entertaining.
Music heard on the show (Whenever Possible, I Will Link To The Song)…
Dimland Radio opening theme song: ‘Ram’ by The Yoleus
First ad break bumpers: ‘Ivo‘ by The Cocteau Twins & ‘Ghosts‘ by The Jam
Second ad break bumpers: ‘Date With A Vampyre‘ by The Screaming Tribesmen & ‘Antonin Artaud‘ by Bauhaus
Closing song: ‘Angler’s Treble Hook’ by $5 Fiddle
That’s it! See you next Saturday night for Dimland Radio 11 Central, midnight Eastern on www.ztalkradio.com you can also download my show from the z talk show archives page. You can email your questions and comments to drdim@dimland.com
You can also go to my CafePress store and buy stuff with my artwork on it and have me do a portrait for you if you like. Find out more here and here.