Coincidence?! Yes
Rene Auberjonois, Michael J. Pollard, and Carroll Spinney all died within days of each other in the last week or so. No, I’m not going to go on (goon?) about famous people dying in threes. They don’t, people just notice in threes.
The coincidence has to do with their deaths and Gilbert Gottfried’s podcast.
Nothing earth-shaking, but it’s kinda nifty.
Correction: I should note, while getting these notes together, I found out that Pollard had died a couple weeks prior to Auberjonois and Spinney. I hadn’t heard of his death until around the same time as the other two famous fellows. Whoops.
Environmental Activist Greta Thunberg Named Time Magazine’s Person Of The Year
Let the climate change denial tantrums begin!

Before Greta Thunberg was named POTY, climate change deniers were attacking her. Her, but not her message, because she made them uncomfortable. They would say she’s being used by the climate change hoaxers. They will say she’s mental retarded. She’s not. She is on the autism spectrum, that doesn’t mean she’s retarded.

She’s making waves and the deniers don’t like it. They can’t refute the scientific facts (well, they can do, but they don’t have the facts on their side), so the attack her.
I read portions of two open letters to her. One from an admirer, one from an asshole.

They can be annoying, TV tropes. They don’t really ruin shows, but I do tend to role my eyes when they pop up. I went over a couple I’ve been noticing.
A Dimland Radio Pedantic Moment: Humpback Whales & The Crew Of The Enterprise 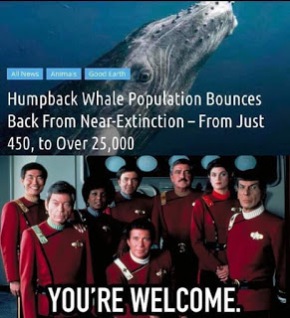 The humpback whale population has made a remarkable come back and the maker of the meme above wanted to make a little joke by crediting the resurgence to the bridge crew of the Starship Enterprise. Except…

That’s the crew from Star Trek II: The Wrath Of Khan not Star Trek IV: The Voyage Home, which was the movie the crew stole two, actually three, one was pregnant, humpback whales from the 1980s to bring back to the 23rd century.

You see, in Star Trek IV, the humpbacks had gone extinct by the 23rd century and a space probe from some unknown civilization was trying to communicate with the disappeared species. So, the crew goes back in time to steal two whales to bring back and tell the probe they’re ok. And, they somehow repopulate the species in the future (three whales are not enough to repopulate the species), not today as the meme maker seems to be suggesting.
However…
Music heard on the show…
Dimland Radio opening theme song: Ram by The Yoleus
First ad break bumpers: Walking On Your Hands by Red Lorry Yellow Lorry & Epic by Faith No More
Second ad break bumpers: Los Angeles by X & Love Like Blood by Killing Joke
Closing song: Angler’s Treble Hook by $5 Fiddle