In last week’s show notes I wrote that I smelled a sweep coming. I was certain the New York Yankees would beat my Minnesota Twins in three games and they did. I explored my reasoning for believing the good guys would be once again bounced out of the post season by the Evil Empire. Both my emotional and rational reasons.
Now, I’m no expert on baseball, but I did far better predicting the results of the ALDS than the local sports talk radio guys did. All of them had the Twins winning the series. Naively optimistic fools.
With the series over and the frustration still fresh, a clever internet person created a video that really sums up the post season woes the Twins have dealt with this century at the hands of the Hated Yankees. Click here to see it.
And I blogged about it here.
Inktober, It’s Not Just About The Likes
Well, of course, it isn’t since I’m barely getting any. I think I’m producing some nice drawings for the month-long event. I’m pleased with most of them anyway. A few more likes would be nice though.
The Inktober Facebook group posted a list of 31 prompts to get internet artists something to draw each day of the month of October. I decided to stick with a horror, scary theme (mostly) for my drawings and to further narrow the scope by making each drawing be a scene from a horror (mostly) movie.
I mentioned a few of them, so I’d better post them:
Day 1: Ring 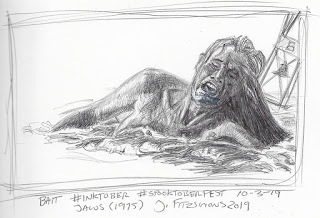 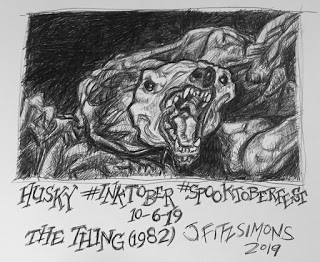 Not bad for fairly quick drawings done in ballpoint pen.
A Dimland Radio Pedant Moment: How Many Arms?
Not so much a moment of pedantry, more a spotting of a continuity error. In the 1995 movie Se7en, a bleak film about the hunting of a serial killer using the Seven Deadly Sins of The Bible to inspire the murders, I spotted an error of continuity. It was while I was working on a drawing for the Inktober prompt of Frail.
I grabbed a screen capture from the scene and I lightened it so I could see what was going on in there. That’s when I spotted he victim had a third arm. Whoops! The arm along his left side should have been covered by the shirt he was wearing (see image below). It slipped out of place and no one caught it.

I have watched the movie a dozen times and I hadn’t noticed it. I fixed it in my drawing.

Sometimes the janitor job offers up some yucky thing that need to be dealt with. I’ve cleaned poop off of carpet and off of walls, I’ve cleaned boogers off of toilet stall partitions, and just this past Friday I’ had to clean some errant-landing urine.
The men’s room had a heavy smell of urine and I discovered why. There was pee on top of the urinal and a big puddle on the floor under it. Yuck. But I did my job and cleaned it up. The smell was eliminated.
Hopefully, it was just an accident.
Cool Thing: In Research Of

A new podcast is being produced by Blake Smith of the podcast MonsterTalk and Dr. Jeb Card, an archaeologist and professor in the anthropology department of Miami University. It’s called In Research Of and it will be an episode by episode reexamination of the mysteries explored by the paranormal granddaddy show In Search Of.