Mom: An Update
It’s hard to she was completely recovered from surgery, but Mom finally went home on Tuesday. It was a few days earlier than the transition care folks advised, but she was getting around pretty well, so she went home.

A Gentle Poke At Religious Folks

I had a little fun with the fact that Easter and April Fools fall on the same day this year. I also talked a little about why I like the cheesy epic The Ten Commandments. And I may have mentioned the the Biblical story of the Exodus probably never happened.
History’s Greatest Hoaxes
A couple shows ago I brought up a series available on Netflix called History’s Greatest Hoaxes as one of my Three Cool Things. I was going to talk about the series a bit more last week, but I ran out of time. This time I got to give the series more discussion on the show.
The series works from the premise that the events examined are hoaxes. The series does not mystery-monger. That’s what makes it different and why I appreciate it. I hope they make more.
Pedantic Moment: History’s Greatest Hoaxes’ Reenactment
During the episode of History’s Greatest Mysteries that examined the “panic” caused by Orson Welles’ War Of The Worlds radio broadcast. During the reenactments I noticed something: There were several shots of actors holding pens that didn’t exist in 1938.
Some Clients, I Tell Ya
I read an Instagram conversation between an artisan and a potential client. There are people out there who seem to think artists and craftspeople should do their work for cheap. It’s an incredible conversation. 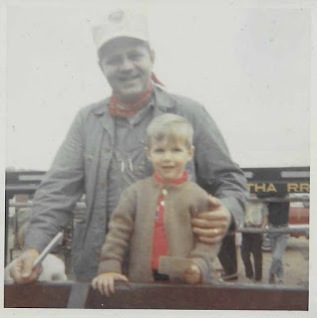 3) My wife dug out this adorable picture of a two year-old me with local TV personality, Casey Jones.
2) I spotted this very cool interactive 360° panoramic view of the surface of Mars.
1) Another cool thing my wife hipped me to this week was this 11 minute video giving a quick overview of the timescale of the universe. Humans take up the last fraction of a second.
Music heard on the show…
Dimland Radio opening theme song: ‘Ram‘ by The Yoleus
First ad break bumpers: ‘Games Without Frontiers‘ by Pete Gabriel & ‘One Day In Your Life‘ by 54-40
Second ad break bumpers: ‘Natural’s Not In It‘ by Gang Of Four & ‘Night Time‘ by Killing Joke
Closing song: ‘Angler’s Treble Hook‘ by $5 Fiddle