There Was A Superbowl

And, as usual, it didn’t involve the Minnesota Vikings. Sigh.

But there was a game and it was very entertaining. And the right team won. Sure, their fan base may have a higher percentage of assholes than most other fan bases, but let’s not hold that against the team. Philadelphians now know something Minnesotans will never know:
What it’s like to have a Superbowl champion team.

A Few Observations About The Halftime Show

Jason Timberlodge was OK. He lip-synced well, despite the audio problems for the first half of the performance. He strutted well and had a few good dance moves. His tribute to Prince and Minneapolis lighting up purple was a nice touch.

And there was no wardrobe malfunction. Unless you count the droopy drawers he wore.

And I did speak of the infamous wardrobe malfunction. I connected it to Pres. Trump calling some African nations shitholes. I was trying to demonstrate how people on either side of the political/social spectrum react to controversies and how they tend to dismiss the other side’s reaction.
During this segment I mentioned the funny supercut video of CNN folks saying “shithole.” I find it absurdly humorous.
Pedantic Moments:  Fargo Series And A Pro Choice Post On Facebook

I did two this week, because I wanted to.

First up was from the television series Fargo season three. Early in that season’s first episode there’s a scene in a Mom & Pop grocery store. Behind the checkout counter can be seen several bottles of liquor for sale. Oh, gosh, no. Not in Minnie-sOH-ta. Doncha know.
The other had to do with this image posted to Facebook: 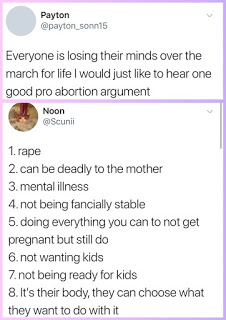 Oh, boy. Abortion. Yikes.
Yep, I went into that topic. Well, not deeply. I talked a bit on each of the arguments for abortion with my pedantry focusing on #5. Everything? Think about it.
Top Three Cool Things Of The Week
Here’s Three Cool Things from this week.

3) I got to hang out with an old friend I haven’t seen in a year.

2) The drones display during the opening ceremony for this year’s Winter Olympics. Way cool.

1) What else would be number one? SpaceX Falcon Heavy! SCIENCE!! YEAH!!!

Adam Carolla stars and co-wrote this very funny and surprisingly romantic film about a 40 something underachiever getting a chance in the boxing world. It’s funny and very entertaining with a cameo appearance by Jane Lynch. You can’t go wrong with Jane Lynch.