As I get older, these years just go by faster and faster. Why it seems just yesterday I was making the same resolution I make every year. And it’s tradition for me to talk about that very specific resolution, which I have yet to break.

Should We Really Feel Guilt About Our Guilty Pleasures?

I don’t think people should feel embarrassed or guilty for liking something other people might think is silly or strange. Hey, your 53 and you like old toys and comic books? That’s cool. You like what you like. As long as you aren’t causing harm to others, why feel shame.

So what if you like ABBA. Everybody should. In fact, those who don’t ought to fell guilty. The weirdos.

My talk about guilty pleasures led me to talk about a deep dive I did on ABBA’s music. I listened to all their albums through Spotify. It turns out that the Swedish supergroup is more a singles band than an album one.

If you know their hits, you’ve pretty much got it. There might been a deep cut or two, but really their singles are so damn good, you don’t have to dig for much more. Unless you want to, then go for it.

Peppermint Lump
I thought I knew virtually everything there was to know about the music produced by Pete Townshend. Well, I was wrong. In 1979, Pete teamed up with an 11 year old girl singer, Angie (Angela Porter) and produced pretty catchy bit of pop tunage.

I’ve been obsessing on the song since I learned about it this past Tuesday. It’s called Peppermint Lump. The little girl lead vocals aren’t great, but that doesn’t stop me from liking it. See the Three Cool Things for the link below.

Conspiracy Theory Response Not Sent
I have more than 2,400 Facebook friends. Many of them skeptics. Some think themselves to be skeptics but they are actually conspiracy theorists. One of them posted some conspiracy nonsense of personal incredulity trying to say 9/11 was an inside job.

I didn’t unfriend the fellow, but I wrote a response to one of his posts. I didn’t send it though. Some hills you just don’t want to die on.

Instead I posted the following XKCD comic strip: 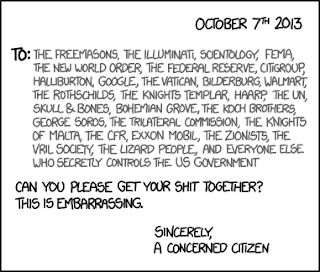 I also mentioned this strip on the show. I considered using it as a response: 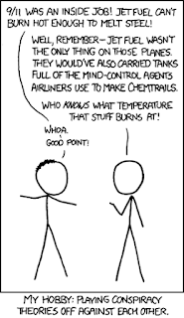 Oregon state has joined most of the rest of the country in allowing people to pump their own gas. There were several comments and memes spreading around the internet poking fun of Oregonians. 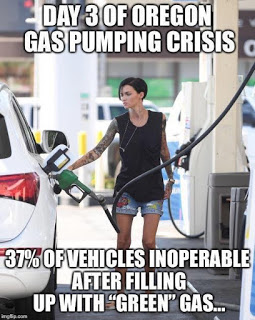 One such fun poker image (see above) left me baffled for quite some time. My Facebook friend refused to explain the joke when I expressed It didn’t understand the “green” gas reference.
The answer did come to me. Eventually.
Top Three Cool Things Of The Week
Here are the Top Three Cool Things from this week.

3) Stan Lee turned 95 on December 28. Yes, that wasn’t this past week, but it’s still cool. I blogged about The Man and his importance in the lives of comic book fans and creators.

2) Season 11 of The X-Files premiered with plenty of alien/conspiracy theory goodness. 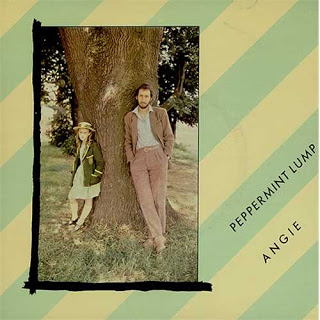 1) And the song that has been this week’s obsession: Peppermint Lump.

I ran out of time, so you are on your own this week.