Pedantic Moment: Bison Not Buffalo
I started off by acknowledging that I had been taken to task for saying buffalo instead of bison when I talked about my family’s trip to South Dakota. It’s true that technically buffalo are found in Asia and Africa, but not in North America. So, I’m sorry I wasn’t pedantic enough.
But, since buffalo has become so ubiquitous in its use over the last few centuries or so, how wrong is it? Doesn’t language evolve with how it is used over time? The old Western showman was called Buffalo Bill, after all. Should we change his name?
Wouldn’t it be better if we were a little more flexible on this?
Oh, but I better remember that the next time someone asks me if I would like to have black or red licorice.
Licorice is black!
How Dare She Say That?!

This bit wasn’t as topical as it could have been if I had talked about it a couple of weeks ago, but I wanted to address the reaction to the part of Michelle Obama’s DNC speech in which she mentioned the White House was built by slaves. In the context of her remarks, that bit was meant to indicate how far we’ve come as a country, but there are some on the far right who only see nefarious intentions when it comes to the Obamas. They thought she was race baiting.

The website Top Right News had an article by Brooke Bosca in which they attempted to say there was one HUGE problem with Mrs Obama’s speech. According to the headline, it was a huge problem, but in the article itself, it was downgraded to a big problem. They attempted to claim that slaves were only minimally involved in the building of the White House. They even went so far as to state that the slaves were paid and they pointed out one in particular named Philip Reid. He received direct payment.
The article provided two link to let their readers know where they had gotten their info about what the slaves did in the building of Washington DC.
Here are those links: The White House Historical Association and Politifact.
Those links refute Top Right News’ assertions. The first link confirms that African-Americans, free and slave, provided the “bulk” of the labor, while Politifact does let us know that one slave was paid directly. The other pay for slave labor was given by our government to the slave-owners, not the slaves. It was a kind of a rent-a-slave initiative.
You can read Top Right News’ attempt to mislead and race-bait their readers here.
Cupping? Really?!
Athletes are a superstitious lot and a gullible one. In the 2012 summer Olympics the bogus device or treatment was Kinesio tape. There were several athletes sporting that silly tape any which way all over themselves. At this year’s summer Olympics, there’s less of the tape, but there’s plenty of hickeys.
These not so critical thinkers are going for the quack practice of cupping. And the media coverage has been what it almost always seems to be when covering pseudoscience: Completely noncritical. Hey, what’s the harm? It works for the athletes, right? Michael Phelps has dozens of gold medals, right? It’s all in good fun.
Tell that to Li Lin. He was having his back cupped in the same seven spots every day for several weeks. Now he has seven gnarly scars of his back.
Cupping is nonsense. It doesn’t provide anything more than the placebo effect. It does lighten wallets and has the potential to damage the skin and cause infection. Just ask Li Lin.
Cupping – It’s hickeys without the fun!
Pedantic Moment: Kelly Clarkson’s Tweet 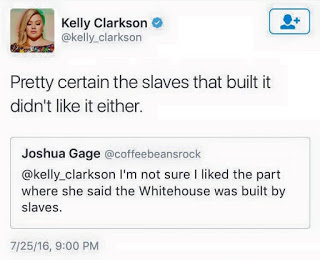 I attempted, on Facebook, a Pedantic Moment relating to the above Twitter exchange, but people didn’t get it.
My remark was, “Pretty certain the slaves who built the White House are all dead now. So, they wouldn’t have heard anything.”
And that confused the hell out of everybody. Everybody except one FB friend who is a writer and caught my joke right away.
But for the rest of the FB folks, I tried to explain what I was getting at. I said, “If I am correct in the timing of the comments, Clarkson is saying that the slaves who built the White House didn’t like HEARING that part either. I’m pointing out that those slaves are dead now, so they couldn’t hear anything said recently about slaves building the White House.”
The second “it” in Clarkson’s tweet is referring to the subject of Gage’s tweet. The subject of Gage’s tweet is “the part where she [Obama] said the Whitehouse [sic] was built by slaves.” So, when Clarkson says the slaves didn’t like it either, grammatically, she saying the slaves didn’t like that part of Obama’s speech.
Get it?!
Dimland Radio ARGH!: Answers Dot Com

I understand what “clickbait” is and I’ll still explore some of it because it might be interesting. But, I will never, ever, ever, EVER falls for any clickbait offered by Answers dot com. (I don’t even want to link to it here.)

What Answers does is get you interested in a story headline and picture, so you click. That’s when the dance begin. To get the full story, you have to click through several pages revealing one line of text for the story per page. They often have the same picture for several pages before switching to a new one for the next several pages.
This is the worst kind of clickbait and I refuse to ever click on Answers dot com again.
Movie Recommendation: Frailty (2002)
Directed and starring Bill Paxton and featuring Matthew McConaughey and Powers Booth, this film is about a widower father and his two sons and the father’s mention from God to destroy demons. The father starts killing people he believes to be demons and his oldest son believes him to be crazy.
Music heard on the show…
Dimland Radio opening theme song: ‘Ram’ by The Yoleus
First ad break bumpers: ‘Super Trooper‘ by ABBA & ‘He’d Send In The Army‘ by Gang of Four
Second ad break bumpers: ‘I Don’t Know‘ by Naked Raygun & ‘This Ain’t No Picnic‘ by Minutemen
Closing song: ‘Angler’s Treble Hook’ by $5 Fiddle