Nervous?
I talked about being nervous before going on the air.  I also talked about my son being in a school play for his class.
Don’t Be That Guy
I commented on a picture posted by a Facebook friend.  It was a somewhat unkind and presumptuous statement and I was taken to task.  Initially, I was going to be that guy and not give in to the commenter who was actually right.  But, I realized I was in the wrong.  So, I wasn’t that guy.
It’s Not True: Urine Alleviates Jelly Fish Stings
It kind of does, but the urine needs to be of a highly concentrated nature.  Vinegar, rubbing alcohol, or sea water will work much better.  Learn more about it here.
And see what Tyler Durden says about a movie featuring Nicole Kidman peeing on Zac Efron here.  Sounds a lot more sexy than it actually is in the movie.

Nobody To Watch Over Me

Because I’m an atheist, I don’t believe in heaven with god(s) and my dead relatives watching me.  This is both freeing and a bit disquieting.  But it is good to know grandma isn’t watching me have sex.
Not A Fan Of Jazz
I admit that I may just be plug ignorant, but Jazz just doesn’t do it for me.  I talked about why the more out there forms of Jazz drive me crazy.  I also have a go at Jeff Goldblum’s character in Law & Order: Criminal Intent.  Jeff Goldblum plays jazz piano and, lo and behold, so does his character! 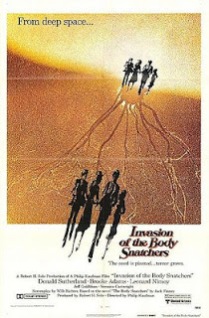 The bleek and startling remake of the 1956 film stars Donald Sutherland, Brooke Adams, Veronica Cartwright, Jeff Goldblum and Leonard Nimoy.  Watch for the cameo of Kevin McCarthy (star of the original) running through the streets shouting, “They’re here!”

Dimland Radio opening theme song: ‘Ram’ by The Yoleus
First ad break bumpers: ‘Johnny Hit And Run Paulene‘ by X & ‘Can’t Ignore The Train‘ by 10,000 Maniacs
Second ad break bumpers: ‘Plenty‘ by The Woodentops & ‘God Damn Job‘ by The Replacements
Closing song: ‘Angler’s Treble Hook’ by $5 Fiddle
That’s it! See you next Saturday night for Dimland Radio 11 Central, midnight Eastern on www.ztalkradio.com you can also download my show from the z talk show archives page. You can email your questions and comments to drdim@dimland.com
You can also go to my CafePress store and buy stuff with my artwork on it and have me do a portrait for you if you like. Find out more here and here.