Twins Win!  Twins Win!
I made a brief mention of my poor MN Twins having won a fourth game in a row.  How ’bout that?
A Little Love For The Grammar Nazis?
Well, sort of.  I talked about a common phrasing that drives me nuts and I argued that Grammar Nazis might actually be doing us a service by getting people to care about spelling.
Talk About A Bad Diet
I related the sad story of a Swiss woman starving to death, because she thought she could live on sunlight and air alone.  She would have done better on just bread and water, despite what the Bible says.
The story is here and James Randi talks about the man this woman got the bad idea from here.
My Full Body Apparition
I told the tale about seeing a man standing in my bedroom in the middle of the night many, many years ago.  I was no more than 10 years-old at the time, when I saw him and panicked and called for Mom and Dad.  Thankfully it wasn’t a ghost and a burglar.  My parents assured me it was my eyes playing tricks on me.
I’m so glad my parents gave me the rational explanation and not the fanciful one that it might have been a g-g-g-ghost!  Zoinks!!
The Screaming Blue Messiahs
Way back on July 22, 1986 at the Minneapolis nightclub, First Avenue, my friend John and I and everyone there were treated to an excellent, surprising, incredible set by a relatively unknown band, The Screaming Blue Messiahs.  They were opening for the somewhat better known band, The Cramps.  The Messiahs were a revelation and blew The Cramps away!
Each of the bumper tunes I played on the show were Screaming Blue Messiahs’ songs, including their one minor hit, ‘I Wanna Be A Flintstone.’  Scroll down for links to a few of their songs.  The songs are awesome!
I blogged about that unbelievable show here.  I also mentioned this clip of The Cramps from the concert film, Urgh! A Music War.  Watch it at your own risk. 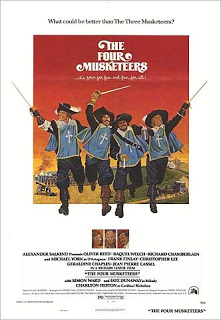 Last week I recommended The Three Musketeers so this week I went with the sequel, The Four Musketeers.  Both films were made at the same time.  In fact, it was supposed to be a three hour epic, but the studio realized they had enough to make two films.  Same director and cast and, yes, more of the yummy Raquel Welch.

Dimland Radio opening theme song: ‘Ram’ by The Yoleus
First ad break bumpers: ‘Talking Doll‘ & ‘Let’s Go Down To The Woods‘ by The Screaming Blue Messiahs
Second ad break bumpers: ‘Wall Of Shame‘ by Killing Joke & ‘I Wanna Be A Flintstone‘ by The Screaming Blue Messiahs
Closing song: ‘Angler’s Treble Hook’ by $5 Fiddle
That’s it! See you next Saturday night for Dimland Radio 11 Central, midnight Eastern on www.ztalkradio.com you can also download my show from the z talk show archives page. You can email your questions and comments to drdim@dimland.com
You can also go to my CafePress store and buy stuff with my artwork on it and have me do a portrait for you if you like. Find out more here and here.