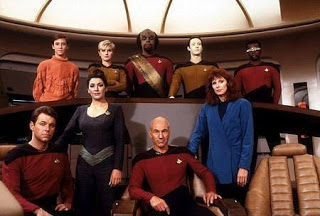 Yes, I’m aware this is well past the point of relevance, but it’s my blog. Lately, one of the local TV stations has been playing Star Trek: The Next Generation. I haven’t seen the show for several years, so I’m taking advantage of their airing it to enjoy them again.

One thing that occurs to me while watching the first season is that the show wasn’t that good when it started. I am aware that the show went into production while a writer’s strike was raging in Hollywood, so I guess it’s understandable that the scripts are far less than stellar (is that a pun?). In fact, much of that first season wasn’t any better than the lousiest episodes of the original series. (Think ‘A Piece of the Action’ or ‘Spock’s Brain’.)

The cast all looked and sounded uncomfortable, especially when you compare them to how they seemed long about the third season. By then the cast had better writers and a much better understanding of their characters. Riker grew a beard (although he never lost that walking as if he had a board up his back), Picard became less bombastic, Worf’s make-up got better, Tasha Yar had been killed off, Wesley Crusher would soon be written off the show and other various improvements.

Some of those other improvements included better costumes and production values. I had heard somewhere that the cast wasn’t very happy with the costumes early on. Apparently, they were too tight and itchy. That may have contributed to the awkward acting in that first season. The set lighting was a bit substandard. And the alien planets looked a lot like sound stages, just like in the original series. Along with the acting and writing, many aspects of the show improved as it became more popular and profitable.

As I said, there was a writer’s strike going on that first season so viewers were treated to some pretty awful storylines and dialogue. In an early episode we were introduced to Lore, Data’s evil older “brother.” (The producers didn’t wait long to use the evil twin cliché.) Lore behaved suspiciously and Data seemed conflicted, so Lt. Yar, the Enterprise’s chief of security, asked Capt. Picard if he could still trust Data. Picard said he could and then admonished the rest of the bridge crew about Yar’s question being a “perfectly legitimate security question.” Picard’s outburst seemed strange to me and Yar reacted like a blushing little girl. This rough and tumble, tough as nails Star Fleet officer was bashfully smiling and batting her eyes at Picard’s statement!

In another episode, this one featuring Q (possibly the best character of that first season) offering Commander Riker the powers of the Q Continuum, a group of nearly omnipotent beings. The actor playing Q, John de Lancie, still hadn’t quite gotten a handle on his character. He had moments of overacting, but he was still interesting. Anyway, he zapped a few members of the bridge crew to the surface of a sound stage where they were menaced by what Worf referred to as “savage animal things.” Really? “Savage animal things?” They couldn’t come up with something better than that?

Then there was Wesley Crusher, the 12 year-old son of the ship’s chief medical officer, Dr. Beverly Crusher. Wesley was probably the fans’ least favorite character. When Wesley wasn’t looking stupid or grinning ear-to-ear, he was saving day. He must have saved the ship half a dozen times that first season alone. 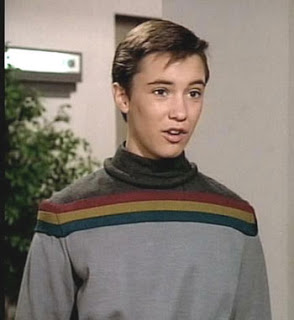 Wesley even suffered the “not now I’m too busy to hear your vitally important information because you are only a child” brush off on more than one occasion. This happened, despite Wesley’s track record of saving the day and the fact that some time traveling alien said Welsey was the next Newton/Einstein /Solock phenom (I wanted to do the two real names and one made up name device used so often in Star Trek). The phenom element never was fulfilled by the series for Wesley. Fortunately.

There were a few interesting moments and developments in that first season, however. The Q and Data characters. Tascha Yar and Data having sex (Data’s an android, by the way). Patrick Stewart had some good moments of acting to go along with his more over-the-top moments. That episode with Q I mentioned had Picard delivering a fine speech quoting Shakespeare’s ‘Hamlet.’ That’s not surprising given Stewart’s background as a Shakespearian actor. 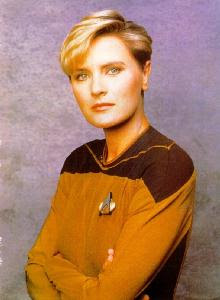 One episode late in that first season did something rather ballsy, I thought. One of the main characters was killed about 15 minutes into the show. It was Lt. Tascha Yar, the chief of security for the Enterprise, not very well portrayed by Denise Crosby. The ballsiness was somewhat diminished when, at the end of the show, the main bridge crew all gather on the holodeck (if you don’t know Star Trek, I’m sorry I’m not going to explain the holodeck) where they watched a prerecorded message from Lt. Yar. It was her chance to say goodbye to each of the cast… er, crew members. But, why would she have made such a recording? Her character couldn’t have been more than 28 years-old and she’s making farewell holo-images for her crewmates? It would have been better to have the bridge crew gather on the bridge or 10 forward (again if you don’t know Star Trek, I’m sorry) to talk about losing her. But then Denise Crosby wouldn’t have had her big goodbye moment, something I’m sure the show’s producers had to do to get her agree to be killed off so early in the episode.

Still, I like the series. However, when it first aired, I didn’t watch it. For some reason, I wasn’t interested. It was during the third season that I tuned in. The series had really gotten rolling by then, which is fortunate, because had I watched the series when it began, I might not have stayed with it for very long.

Grow old and do well.

3 thoughts on “the first season of star trek: the next generation kinda…sucked”