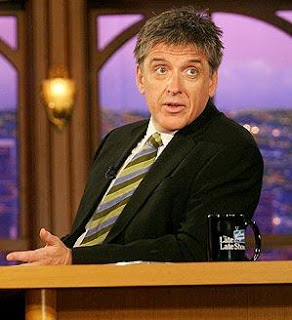 When did the bands on the late night talk shows become so domineering? I’m old enough to remember Johnny Carson and I remember that he had a great band, but the band did not dominate the show the way today’s late show bands tend to do. Johnny’s band played the intro, the cuts to commercial, the guest entrances and the end of the show. Yes, they had a bit more involvement than that. “Is Doc here?” “Doc’s not here.” Johnny would poke fun at whatever Doc Severinsen was wearing or how dull Tommy Newsom could be. There was the ‘stump the band’ bit and the occasional rim shots, but the band fit right in its place.

For some time now,however, the bands have been becoming bigger and bigger and more intrusive. I don’t know exactly where to put the blame. Was it Letterman’s or Leno’s fault?

When David Letterman started NBC’s ‘Late Night’, he had the very talented and funny Paul Shaffer and what would later become ‘The World’s Most Dangerous Band’. At first, as I recall, Paul and the band had about the same involvement as Johnny Carson’s band. Soon, it was discovered the Paul Shaffer was funny and worked well with Dave and the band took on a little more significance. Still the band did not take over the show. It was a very good four piece band that entertained the audience during the breaks and Paul would get some laughs.

Then, Jay Leno took over the ‘Tonight Show’ and things started to change. Johnny’s band was pretty sizable and so was Jay’s. Leno’s first bandleader was Branford Marsalis. Marsalis left after two or three years because he didn’t have much of a sense of humor (that’s just a guess on my part) and Kevin Eubanks took over. Kevin is good, but not nearly as funny as Paul Shaffer. (None of the late night bandleaders are.)

Letterman left NBC and started up the ‘Late Show’. That’s when Dave’s band got much bigger to match the ‘Tonight Show’. Leno had a gal who started singing during the breaks, so Letterman got one, too. The bands started getting louder and more showy.

Conan O’Brien now helmed ‘Late Night’ and he had the Max Weinberg 7. Another good band, but Max Weinberg was really no Paul Shaffer. Max just isn’t funny. I do like the ‘In the year 2000’ bits, which utilize one of the band members. The main problem with O’Brien’s band is the brashy loudness of it. Just listen to how they play on Conan’s entrances now that he has the ‘Tonight Show’. The squealing trumpet is enough to give me a headache. Squeeeeeal! Squeeeeeal! Squeeeeeal! Isn’t it exciting?! No! It’s just loud.

Now Jimmy Fallon is hosting ‘Late Night’. And his band is an already established band from Philadelphia called The Roots. They’re also a good band and Fallon really uses them a lot. He is new to the format so they’re working on it. But every night Jimmy yells for me to “give it up for The Roots!” Well, I don’t want give it up for The Roots and why are you yelling so much, Jimmy. Seriously, every time he introduces a guest it’s as if he’s giving the “Live, from New York, it’s Saturday Night!” yell.

Jimmy Kimmel has a late night talk show. The show has a band, but I never watch much of the show so I really can’t say anything. So, I won’t.

Maybe I’m just being a traditionalist crank here, but I liked the way Johnny’s and Dave’s bands used to be. There’s just something annoying about the shows coming back from commercial break and seeing one of the band members singing. It just bugs me.

On the other hand, CBS’s the ‘Late, Late Show’ with Craig Ferguson doesn’t have a band. It doesn’t need one. Craig frequently complains about not having a band, but I disagree. He is probably the only late night talk show host today who can do an hour long show without a band or a sidekick. He could almost do the show without guests.

I hope Craig Ferguson never does get a band. It would diminish the show. As my wife said when I remarked that Craig doesn’t have a band, “That’s awesome.” It is awesome. Please, CBS, no band for Craig.