Babes In Toyland (Minneapolis band) At first, I wasn’t sure of my memories of this band, but I was able to get a hold of John and he confirmed what I remember. When we saw them, Babes In Toyland had four members. They had a lead singer. Kat Bjelland played guitar and did backing vocals.

While John and I were hanging out at First Avenue every Tuesday for the Club Degenerate dance nights, we got to know a woman named Cindy Russell. Cindy was also a regular of Club Degenerate. She would be out on the dance floor before the night really got going, dancing to whatever Kevin Cole was playing. She was very theatrical in her dancing as she made use of the nearly empty dance floor. She twirled and jumped and threw her scarves in the air for dramatic effect. She even did a couple on stage dance cameos for Club Degenerate. 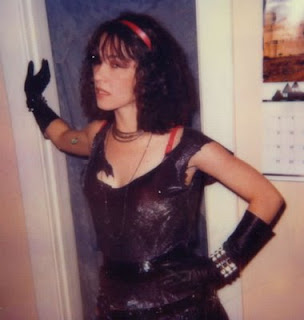 This is Cindy Russell. She gave me this picture way back in the late 80s.

John and I became familiar faces to her and she began to come over to talk to us. She’d bum a cigarette from John and, soon, John and I became her ride home. Not every Tuesday, but many of them, John would see her move from group to group, looking for a ride. She’d end up with us.

One night, she told us that she was in a band. She introduced us to the bass player. I’m not absolutely sure, but I think it was Michelle Leon. And I think I bummed a cigarette from her.

Cindy told us that her band would be doing a cameo during an upcoming Club Degenerate. So, John and I were right up front to check them out. They were introduced as Babes In Toyland and Cindy was their lead singer.

They were pretty rough and Cindy didn’t have the best voice. One song was called ‘X Means Danger’, I think. Another song dealt with a father molesting his daughter. Pretty cheery stuff, eh?

Cindy’s involvement in the band didn’t last long. The Babes as a quartet had produced a demo tape that they sent on to Steve Albini. Albini was in the bands Big Black and, later, Shellac. He also produced records, most notably Pixies’ ‘Surfer Rosa’ and Nirvana’s ‘In Utero’. So, he was kind of a big deal.

Cindy told us that he listened to the demo and advised them to get rid of the singer. He said her voice was “too husky”. So it was goodbye to Cindy. She got the boot.

There you have it. Babes In Toyland was once, however briefly, a four piece band. And you won’t find this info anywhere else.

This was probably one of those special Club Degenerate concert nights. But, since I don’t have a ticket stub, I can’t be certain.

I didn’t know much about Johnny Thunders at the time. I think I knew about his involvement with the New York Dolls and his big solo tune ‘Chinese Rock’. I did know he was pretty important to the punk scene.

He wore what looked like silk pajamas, as he playfully engaged in insulting the audience. He’d make some disparaging comment about the audience. We would give him the finger or yell, “F@$k you!” It was so punk rock.

John and I also had the honor of standing next to one very big Johnny Thunders fan. It was Paul Westerberg (of The Replacements, as if you didn’t know). It was Paul who wrote the prophetic song ‘Johnny’s Gonna Die’ about Thunders. It wasn’t long after this show when Johnny did, in fact, die.