With a name like Fuckin’ Shit Biscuits these guys must be good, right? Well, it depends on what you mean by “good”. Were they great musicians? No. Did they have great lyrics? I couldn’t tell you. Were they fun to watch? Absolutely!

John and I loved it when these guys what make an occasional cameo appearance on Club Degenerate nights at First Avenue. Their music was a bunch of noisy crap, but their attitude was fantastic. They were a punk “jam” band (at least that how they were described online in the only listing I could find about them) that wasn’t as concerned with making music as with making noise.

I know I have said that John and I don’t do audience participation, but the Biscuits were different. Their idea of audience participation consisted mainly of having the audience throw beer at them. They would have the front of the stage lined up with plastic cups filled with beer as they began to play. The lead “shouter” would announce, “Free beer! Free beer!” The crowd would advance and grab a cup, drink a gulp or two, then throw the remainder at the band. Halfway through their first number, the band would be soaked with beer.

John claims he was the first audience member to throw a beer, thus setting off the tradition. He might have been first, but it was so long ago I can’t remember.

We’d seen them several times at First Avenue. Always threw beer, sometimes paper airplanes and, once, raw fish. The raw fish was brought out by the band themselves. They threw it out to the crowd, so we threw it right back at them.

During one of their cameos, they gave out cassettes of their live performance and John managed to nab one. Another time they threw out guitar picks. I snagged one and discovered it had the words “Shit Biscuit” printed on it. I still have it. 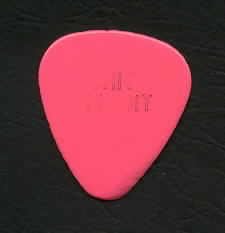 They made a horrendous noise, but put on a good show.

A couple notes about the band photograph.

First is the circled audience member. That is very likely my friend, John. John and I both remember being at that particular show and it sure does look like him.

Second, John pointed out something interesting about the photograph. There appears to be no women in the audience. I can’t spot any, can you?. It’s all men. John said of this, “Seems strange having a bunch of dudes watching dudes in loin cloths.”

I had intended to see the ‘Burbs at First Avenue in July or August of 1984, but the event was sold out. So, my first time seeing the band and my first time entering the legendary Minneapolis nightclub would have to wait.

My inaugural visit to First Avenue would happen a month or two later (The Replacements, 9/5/84). I would see The Suburbs a year or two later at the Cabooze. This would be the only time I would see this band.

The Cabooze is an odd sort of club. It’s located right next door to a biker bar called Whiskey Junction, and the two bars share an outdoor patio area. The layout of the Cabooze is long and narrow, with a back section that has two levels of pool tables and a bar.

The stage area is pretty cramped. The ceiling is somewhat low and from the stage the metal rafters are easily accessible. A fact I will refer to later. The stage itself is pretty small, but they managed to get the five member band on it.

It was a packed house for the band. They were already long established local legends and were starting to get real national attention. They were about to sign to a major label, when John and I saw them play.

Tight and highly energetic, they kept the joint jumping. And Beej took advantage of the metal rafters to swing himself around. I seem to recall him swinging over to stand on the bar and play there for a while.

It’s a shame the band broke up just before they had a chance to break the national scene.

Incidentally, in 1996 I interviewed for the job of production artist at the failing Minneapolis t-shirt printing shop, Cold Side Silkscreening. (Seriously, they’re in desperate need of business. If you need t-shirts printed get in contact with them. http://www.coldside.com ) During the process, it came down to two candidates; me and Bruce Allen, former guitarist for The Suburbs.

Bruce was quite the talented graphic artist, but, at the time anyway, he was also bursting with nervous energy. Bruce’s edginess was a concern for the nearly comatose art directer who would be working closely with whichever of the two candidates they picked.

Apparently, I was the calmer of the two. I also possessed considerable graphic arts talents, so I was hired.