This was the second time I had seen The The and the first for Amy. Amy and I were pretty tight by this time. We were close to moving in together at her apartment. One bedroom, shared with a dog and a cat, pretty cramped, but we enjoyed being together.

Anyway, that really has nothing to do with the show. The show we enjoyed, but I don’t recall much from it. A single, bare light bulb dangling over Matt Johnson’s head comes to mind, though I can’t be sure I’m remembering correctly.

Boy, there’s so little to relate here. In fact, Amy and I had completely forgotten we’d seen Boss Hog. The ticket stub surprised us. “We saw them?!” was our response.

When I examine my memory of this show all that I can picture is Amy and I and, maybe, Mark standing on the upper level right above the left side of the stage. I can picture a woman strutting the stage, but I could be way off.

This was a good show. It was just Bob on a stool, center stage, with his acoustic guitar. He played acoustic versions of his solo material. Bob Mould is one of my favorite guitarists and he was playing really well that night.

Amy and I were able to sit at a table on the upper level to the left of the stage. The table was right up at the railing, so we had an excellent, unobstructed view of the performance.

Bob would give background information on some of the songs or tell stories related to them. He would then play his songs with great intensity. So great that we could tell that his hands were hurting. 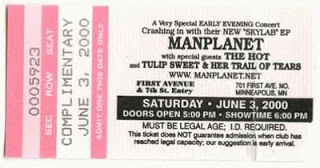 I mentioned Cold Side before. It’s a struggling t-shirt printing shop in downtown Minneapolis. Well, Amy and I were both working there at this time and several of our co-workers were either in bands or had been in a band or two or three. One such co-worker was Mark. Mark was a member of the band Manplanet, kind of a Devo-type band. They had a pretty good local following and Mark got us tickets to take in their big show at First Avenue.

Amy, Mark (not the Mark in the band) and I arrived after Manplanet had taken the stage. There were several other Cold Side employees (present and former) there as well. The three of us decided to just hang back by the bar and watch the show.

The show was space themed in its stage presentation with lots of space props. The band members wore some sort of spacesuit, each a different color. I think our friend’s was purple.

I remember one of the stage props, suspended above the front of the stage, had fallen onto the crowd. Fortunately, no one was hurt. In fact, it kind of added to the fun of the night. 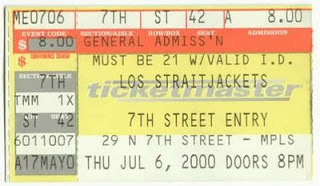 This was a blast!

A very festive night, spent with Cold Side co-worker, Lee Ann and her then boyfriend, Stefan (Stefan passed away a couple years ago from a drug overdose); a former Cold Side co-worker, Dave, and his wife, Rosemary. We were all gathered at the front of the stage. If you’re not familiar with the Entry, its stage is only about 18″ up from the floor, so you can get very close to the performers. Very intimate.

Los Straitjackets are very fun. They play some damn good guitar driven surf music. I danced as I hadn’t danced in a few years. Great fun.