I had heard of both of these bands before I met Amy, but I hadn’t heard any of their music. Amy introduced me to the Reverend, she had two or three of his albums, and I liked what I heard. So, the time came that the Reverend was making another trip to First Avenue, this time with Los Straitjackets opening. Amy and her longtime friend, Mark, were very excited to see them and to have me see both artists for the first time.

I was very impressed by both bands.

I thought Los Straitjackets were just a little more fun than the Reverend, but just a little. Los Straitjackets are an extremely tight, imaginative, surf guitar instrumental band, in case you didn’t know. I loved their humor displayed in their face gear (wrestling masks) and the faux Spanish announcements of songs. I was so impressed with them that I bought two of their CD’s at the merchandise table right after the show.

The Reverend Horton Heat was quite the crowd pleaser and one hell of a guitarist. His band was also extremely tight and entertaining. They made a lot great noise being just a three piece band.

And another band introduced to me by Amy. As in the case of Reverend Horton Heat and Los Straitjackets, I had heard of Yo La Tengo, but had never seen them or heard their music until I met Amy.

Yo La Tengo is one of those bands that plays crazy fast and rockin’ and then plays mellow and smooth. A playing style that can be very exciting if done well and Yo La Tengo are very good at it.

We enjoyed the show, but we would have enjoyed it more if not for a particular audience member. Yep, here I go again. Amy and I were really starting to get easily annoyed by audiences. It must our age catching up on us.

This fellow was so listen-to-me loud. No, he wasn’t whooping and cheering loudly. He was just yakking and yakking to his friend through the entire show. He was talking loudly so that everyone could hear how interesting and important he was.

Amy and I weren’t the only ones annoyed with Mr. Important. There were several people standing near him who began to tell him to shut up. Mr. Important may have gotten the message, but, I’m not sure because, as I recall, Amy and I moved away from him and enjoyed the rest of show.

I don’t remember Hank Williams III. We may have arrived later and/or hung out elsewhere at the club. Too bad though, it would be nice to have some memory of his show, good or bad. He is kind of a big deal.

The Reverend Horton Heat show was good. The Reverend torn up his guitar, Mark cheered for Nature Boy Jimbo and everyone had a good time.

During the set, my wife, Amy, was fortunate enough to snag a guitar pick that the Reverend had thrown to the crowd. So, Amy plucked up the courage (she’s normally rather shy) and went over to him. He gladly signed the guitar pick. 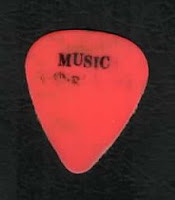 Amy was able to find the pick, unfortunately, the Reverend’s signature didn’t stick.