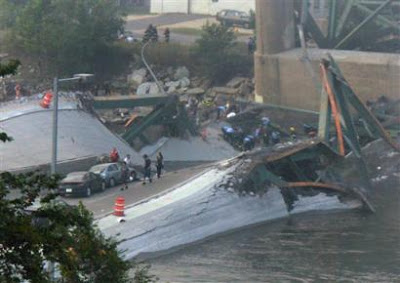 A friend of mine who lives in Arkansas sent me an email to make sure that my loved ones and I were all right. Here’s the response I sent him…
Hi, Bill.
I thought I might hear from you. Yes, everyone is ok. I don’t use that bridge in my commute to work, but I used to.

Amy was on that bridge just within the last two weeks. Very scary when I think of how this could have happened at anytime.

Our son, Hayden, had his four year check up yesterday. The appointment lasted much longer than we had anticipated, so I took the whole day off. He’s good, no worries. So, it wasn’t until this morning, when I parked where I normally do when going to work, that I was able to walk over to the bridge and have a look. It was about a half hour walk to the bridge and I didn’t see much when I got there. The authorities won’t let the public get very close.

I did see an empty I-35W. That is an eerie site. It’s always flowing with traffic, especially at 7am. Then I could get around to see the south end of the collapsed bridge. I could just see the underside of the bridge sloping down at about a 45 degree angle. That ain’t right. Sen. Klobuchar is right, bridges should not just fall down in America.

I imagine that at some point, after the recovery effort is complete, the public will be able to get a closer look.

It’s really something. We’ve seen tragedies happen before. Since Amy and I moved into our house in 2000, there’s been the Columbia space shuttle accident, Sen. Wellstone’s plane crash, the tsunami, 9/11, Katrina. Events that pull the country’s and the world’s attention away from the everyday. For us, Amy and me, the Wellstone death had hit closest to home, but not as close as this. I may have voted for Wellstone in 1992, but I used to drive over that bridge everyday.

It’s not just some bridge in some remote area or somewhere I’ve never been. I knew that bridge very well. If this accident had occurred 8 years ago, I might very well have been on it. If it had happened two weeks ago or so, Amy could have been on it. (Not to mention the hundreds of other times we’ve driven over that bridge.) That’s really close. Too close.

I heard a story this morning that I hadn’t heard in all the coverage in the last day and a half. Apparently, there was a fellow trapped in his car and rescuers just weren’t able to get him free. He was still alive, but he wasn’t going to survive. Someone in the crowd of people trying to help handed the man a cell phone, so the man could call his wife and say goodbye. I can’t help but think of my wife, Amy.

Now, not to get all political on you or anything, but I wonder how long it will take for someone to blame Bush. I’m not sayin’, I’m just sayin’.

Sorry about that last part. I needed to insert that. I was getting a little too emotional for my liking.

Anyway, we’re ok. The bridge will be rebuilt. Maybe our infrastructure will be getting the serious attention it deserves. And, hopefully, the final death toll will be mercifully low. Our hearts break for everyone touched by this tragedy.

Hug your family, kiss your wife.
Your friend,
Jim