Skip to content
Jeepers! It’s difficult to keep a blog going. Let alone continue this series on comic books that have changed my life. But, undaunted, I present the fourth installment.

Let’s start with the covers. Both penciled by the fantastic Gil Kane (I’m unsure who the inker was). Gil Kane must have done half of all the covers of Marvel titles during that time period. And looking at his work, it’s easy to understand why. His dynamic drawing style was perfect for pulling in the buyers. I just might have to do a perspective on Gil Kane’s covers one day.

The cover of #18 is good. It’s not quite the best Kane could do, but it does set up the battle of two super-powered groups very nicely. Issue #19, however, is very good. Our defeated heroes strew over a rubble pile in the foreground, their conquerors in the background. Look at the Hulk. Look at his hand. That is classic dynamic Gil Kane stuff! That’s the kind of cover that makes you want to get the book. And when I as a kid, I did.

These two issues also give me the opportunity to address the influence an inker can have on the art of a book. Both issues were penciled by Sal Buscema, younger brother of the brilliant John Buscema. Although, never quite achieving the level of his older brother, Sal was a good and capable story-teller. And in issue #19, he has a transcendent moment. I’ll get to that later.

The inker! Ah, yes, the inker. They aren’t simply tracers as one of the running jokes in ‘Chasing Amy’ suggested. A good inker can bring up the level of the penciler, just as a bad one can bring a penciler down. Some inkers work better with certain pencilers, but not well with others.

Here’s a great example of how an inker affects the finished art. Issue #18 was inked by Dan Green. Green was a good inker. Issue #19 was inked by Klaus Janson. Janson, when paired with the right penciler, was great. I’ve selected two panels depicting the Hulk, one from each issue. The first was inked by Dan Green. The second by Klaus Janson. Note the flatness of Green’s Hulk. Compare that to Janson’s Hulk. Janson’s Hulk looks alive, real. Both panels were penciled by Sal Buscema, but the Janson inked panel elevates Sal’s pencils from good to great. No, the inker is not just a tracer.

There’s a nice sequence of panels depicting Dr. Bruce Banner defusing some mini nuclear bomb device. Sal and Klaus do a good job of showing how the tension filled moments are bringing Banner into transformation into the Hulk. He must defuse the bomb and stave off becoming the Hulk at the same time. I’ve included part of the sequence here… 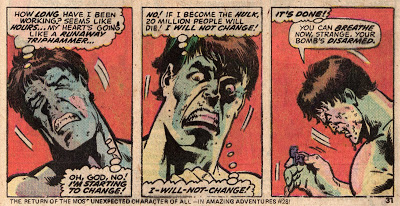 Now that transcendent moment I mentioned earlier. It’s in issue #19. It’s page 17. The whole page is top-notch design, layout and storytelling. Sal and Klaus really cook on this page. The Defenders have regrouped after their initial defeat at the hands of the Wrecking Crew. These super-powered bad guys are still basking in the afterglow of overconfidence when the Defenders fight back.

Thunderball (one of the bad guys) seems to have gotten the better of the Hulk. He comes at the Hulk filled with bravado, believing the Hulk can be easily defeated again. Thunderball is wrong. The Hulk catches the wrecking ball weapon, crushes it with one hand, and sends Thunderball flying. The sequence is so dramatic. Just look at the third panel. The shadow of the wrecking ball half covers the Hulk’s face, but the Hulk doesn’t care. He’s angry. Very angry.

Each panel is perfectly timed. Thunderball slowly realizes that the Hulk will not be defeated and that he’s gonna get his butt kicked. The page builds so well until, in mighty Marvel fashion, it culminates in the final “Nuff said!” Brilliant! 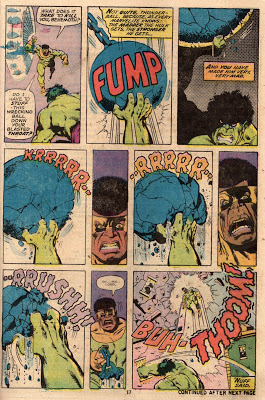 More will be coming. I may even take my first step into DC Comics territory.