My wife is putting together a new website for me. It may take some time, so bear with us.

This should improve the blog situation for me. We will switch over to WordPress for the blog. I am currently using Blogger and Blogger sucks.
Holding The Snark At Bay

I told the tale of a recent visit to the supermarket and my use of the express lane when I was pushing it on the number of items. I was admonished by the cashier. I apologized to her. She was right, mostly. However…

There was no one behind me in line.
Another Python Has Died

I talked a little bit about Monty Python member Terry Jones’ illness and death. The illness he had was a form of dementia that robs people of their ability to communicate. My father-in-law had the same thing. I talked about how it affected him.

I also blogged about Terry Jones this past week.
Islamophobia Slinks Around The Internets 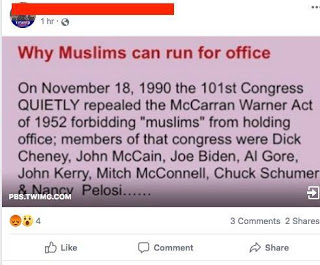 A couple of my Facebook friends, one of whom is a cousin of mine, shared the above image. It’s bullshit. The McCarran-Walter Act (not McCarran Warner Act) of 1952 had to do with immigration to the United States. It did not ban Muslims from holding political office.
If it had, it would have been unconstitutional. There is no religious requirement to hold office. I pointed that out on both of my FB friends’ posts. My cousin responded that his Facebook had been hacked and he didn’t post that image. He removed it and changed his password.
My Old Art School Is Now A Boutique Hotel

It’s gone from a yearly tuition of about three grand when I attended school in 1983 to about 20 grand a year when it stopped being an art school. Now that it’s a boutique hotel it’s a mere $249 to $449 a night.

Click here to see some of the rooms that are available. I can place a couple of the rooms, but the renovations make it difficult.

And It’s Not Haunted!

Well, probably not. It was rumored that a servant who worked for the rich family who owned the mansion turned art school turned boutique hotel hanged herself in the main stairwell. Which of course means her ghost haunts the place.

The claim of the old art school being haunted got me thinking of something I saw on social media. It’s a video that was shared by noted skeptic Sharon Hill. The video is a ten minute discussion of a live event edition of the Ghost Adventures show and its shortcomings due to not being able to edit. Its host Zak Bagans has done very well financially NOT finding ghosts.

And I thought of another video that was part of an attempt to bring a skeptical ghost and other paranormal claims investigation show to cable television. The attempt was called The Skeptologists and it didn’t fly. The cable networks prefer mystery-mongering shows to science-based skepticism.
Well, that crew was investigating an allegedly haunted ship, when their producer played a little trick on them.
Cool Thing: Bluntnose Sixgill Shark