More Talk About My California Trip

Yep. There were a few things that I didn’t get to last show. I know, I know. But at least there will be less photos this week. That’s something. Right?

Corrections
There were a couple misspeaks on my part last week. Placerville is east, not west, of Sacramento. And Robyn is Douglas’s, not Michael’s, girlfriend’s friend.
Some People Have All The Luck
Just a few weeks before I received my jury duty notice earlier this year, a co-worker received his notice. It would be his first time. I helped him apply for a postponement, which he was granted.
His new start date for his week of jury duty was July 1st.
Turns out. He didn’t have to serve a single day and Ramsey County still considered his jury duty service complete. Lucky duck.
I explain on the show.
Our Fourth Of July Tradition
A spontaneous suggestion one Fourth of July a few years ago has led to this unusual tradition in our household: My wife paints my toenails. This year the color is pink.
The photo is as close to naked as world will ever see me.
Trump’s Verbal Gaff, Social Media’s Glee, And A Facebook Friend’s Unintentionally Ironic Posting
So Fearless Leader arranged a Fourth of July celebration at which America unzipped its pants in order to take its weapons out to show the world how tough it is. Too many it was a pointlessly expensive gesture. However, it did provide social media with plenty of joy at the fact our president misspoke during his speech. He stated that there airports during the American Revolution that need to be taken by our army.
Social media loved the mistake and made as much fun of it as it could. Some of it was pretty clever.
I have a Facebook who has been a very vocal proponent of the man-child in the Oval Office and a vociferous critic of Democrats and liberals on her social media platform. The day after the president made his gaff, during the firestorm of humorous responses to that gaff, she stepped right smack in the middle of the Irony Zone. She posted a link to an article critical of Americans for forgetting the history of their country.
Do you see the irony?
I did.
Cool Thing #1: Minnesota Twins’ Home Run Record
The Twins just broke the record of most home runs hit before the All Star Break. The old record, held by the Hated Yankees, was 161. The Twins have reset that at 165 with one more game to be played before the break.
In your face, Hated Yankees!
For One Afternoon During My California Trip, I Wore A Blue Shirt
In order to get my friend Michael to wear the 1987 World Series Champions Minnesota Twins button while we made our second visit to downtown Placerville I agreed to wear a LA Dodgers item. Michael had me wear a Dodgers shirt.
I wore it without any worry of reprisals. Maybe I should have worried though. We were in San Francisco Giants territory. However, I received no grief from any Giants fans. In fact, I did receive a “Go, Blue!” cheer. Go figure.
Speaking Of The San Francisco Giants
As I said, while I was in California I was in Giants territory. And Michael told us we would be seeing ugly orange with black trim Subarus all over the place, while we were in Placerville.
But the only one I saw while there was the one Michael pointed out to us while we were heading back to his place after our Sunday afternoon trip into town. And I barely caught a glimpse of it.
However! When I got back to Minnesota I saw two in the week or so since I’d been home. That’s twice as many as I saw in California. One was parked behind Nostalgia Zone and I parked right next to it. The other was spotted parked on a side street near my home. There’s a neat coincidence about the name of that side street and that most despised car.
You’ll have to listen to hear the coincidence. I can’t give everything away on the blog.
Cool Thing #2: How To Tell A $100 Bill Is Genuine
The current American $100 bill has several ways to check that it is authentic. Holograms, security strips, watermarks, etc have been employed by the US Treasury to protect against counterfeiting. But there was one other security measure of which I had no idea.
Click here to see the security measures, including the one that was new to me. Pretty cool.
Some Silliness In Placerville
While enjoying the Placerville Brewfest, I spotted a couple moments of bullshit. One was a booth taking space away from another brewery or food vendor in order to give it to a cold reader. The picture will clue you in on how I felt about a “fortune teller” being included in the brewfest.
A more permanent display of bullshit is a store peddling nonsense. The store is called Vibes Up and its website is a smorgasbord of pseudoscientific gobbledygook. Just check out the screen captures. (I hope they are readable.) 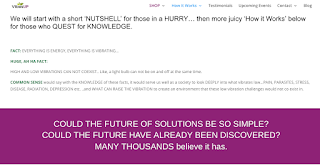 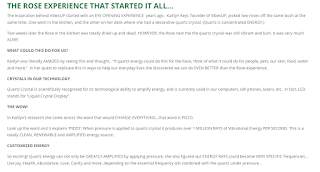