There was new playback and chat room on Z Talk Radio for this show. Saturday was the night of the annual big scrub job for my janitor job. I still recorded a show as per usual and these are the notes for that show.
Enjoy.
Isn’t It Ironic? Well, Maybe Slightly
Just earlier in the day when I recorded this show several of my Facebook friends were sharing links to articles with headlines suggesting how ironic it was that Kentucky’s Ark Encounter Park (an actual attraction that assumes the Noah’s Ark story in the Bible is true) had flood damage due to rain.
I read one of the articles. The headlines were misleading. (Here’s one example.) The article stated that an access road to the replica of Noah’s Ark was damaged, not the ark itself. I was disappointed and thought this story wasn’t an example of irony. I stated as much of Facebook, as well.
Weeeelll, some Facebook friends did give good arguments on why it was still ironic. More on that on next week’s show.
The 2019 Minnesota Twins Have The Best Record In Baseball
I can’t shake the feeling this roll of home runs and wins the Twins are on will come to an end, I am a fan of Minnesota sports team after all. Still, it is astounding how well this team is doing. As of this writing, they have the best win/loss record and the most home runs (104) in the majors, seven more than the Seattle Mariners who have played three more games than the Twins so far this season.
It’s a nice feeling, but they’ll return to earth soon, right?
A Facebook Discussion With Two High School Classmates Of Mine
People tend to accept dubious stories as true if those stories coincide with their worldview and personal biases. And because I am a people as well, I try to be aware of this and vet the stories I share on social media. I also occasionally point out when friends have let their biases lead them to sharing dubious and discredited stories.
The other day a high school classmate of mine shared a blog item from 1998 about actor Robert deNiro being linked to a French prostitution ring which was also connected to child sex trafficking. deNiro was questioned be French authorities because his name was mentioned in connection to the prostitution ring (not the child sex trafficking). He was questioned and released uncharged.
That was more than 20 years ago, but that doesn’t stop the internet from bringing it up.
I shared a Snopes article that discredited the pedophilia angle that was being pushed around the webs. The discussion went from there. Here was mine final response:
“It is true that Robert De Niro was linked to a child prostitution ring in 1998 in France, because ONE person involved mentioned his name. The French authorities questioned the actor for nine hours and then released him uncharged.

This linkage is from more than 20 years ago and I’m unaware of and I can find no other more recent links to child prostitution or pedophilia concerning De Niro. The resurfacing of this story appears to be an attempt to discredit De Niro, possibly in response to his recent anti-Trump statements.

I’m a skeptic. When a story seems hinky or is from a source that I’ve never heard of, my skeptical antenna goes up and I take the time to see how reliable the source is and if the story is credible.

Part of my personal skeptical activism is to encourage my friends to vet stories before sharing them on social media. Read the article. Don’t just go by the headline. Look for other sources.

I even confirm celebrity death notices before commenting or sharing.

Remember the nation wide scare about ritual sex abuse at day care centers all over America that ran rampant in the ’80s? The McMartin case in California? Jordan, Minnesota?

Well, it turned out it was an unfounded panic sparked by well-meaning parents, social workers, teachers, politicians, and prosecutors. But there was no vast ritual child sex abuse going on in this country.

I bring it up, because as those cases finally began to fall apart, investigators were beginning to doubt the claims. The claims became more and more outlandish. The supporting evidence was just not there. And one claim that helped the unraveling was that ONE child mentioned Chuck Norris as one of the abusers.

So, we can rightly say that Chuck Norris was linked to the ritual child sexual abuse at day cares throughout America in the 1980s. The statement would be true. But would it be fair to Mr. Norris?

I’m asking you to be skeptical.”
Apparently, Ghost Hunting Is Still Happening. And Still No Ghosts

No ghost, but plenty of anomalies, which may not be what people are hunting for, but that’s what they keep finding. And on a recent Jason Show, a Twin Cities morning talk show, host brought in a sincere, honest, intelligent, and well-meaning ghost hunter to talk about her recent hunt in a “haunted” apartment in New Orleans, the “most haunted city in America.”

I’m Not Sure About This
There is this thing called the National Popular Vote Interstate Compact (NPVIC) that is a pledge that 14 states and the District of Columbia have signed up for that voices those states agreement to give their electoral votes to the presidential candidate who wins the national popular vote. This pledge would go into affect provided that enough states sign on to bring their total of electoral votes to at least 270, the number needed to win the office. New Mexico is the latest to take the pledge.
This is to prevent another 2016, but would it be constitutional? And couldn’t this, in effect, disenfranchise the states whose voters voted for the lower vote-getting candidate?
This whole national thing is pretty complicated.
Not A Movie Recommendation: It’s A Mad, Mad, Mad, Mad World (1963)

I often say art is subjection and comedy is hard. One person’s hilarious movie is another’s “This is stupid” experience.

I finally watched the madcap comedy classic It’s A Mad, Mad, Mad, Mad World. So much yelling, so many impossible to survive situations, so much stupidity, and way too much human air raid siren Ethel Merman. I thought it was horrible without a single moment that worked for me.
Well, there was one. That is until Dick Shawn showed up to ruin the moment.
Three Cool Things

1) This photo (above) of actor Max Schreck in costume taking a break while filming Nosferatu in 1921. I hope the photo description is accurate. Nevertheless, it’s damn cool.
2) This audio clip of Grace Slick’s isolated vocals on the psychedelic rock classic White Rabbit. Some echo, but no other obvious studio trickery. And no auto-tune. It’s so very cool. 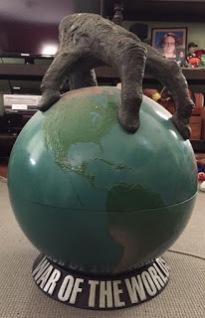 3) Hey! Every home should have a globe. I found this one in the basement of Nostalgia Zone, a store filled with comics and collectables, and I had to have it. We figure it is a video store display case for the short-lived Canadian TV series War Of The Worlds (1988-90). It’s out of this world cool!
Music heard on the show…
Dimland Radio opening theme song: ‘Ram‘ by The Yoleus
First ad break bumpers: ‘Tom Sawyer‘ by Rush & ‘One Day‘ by The Church
Second ad break bumpers: ‘Pretty Girls Make Graves‘ by The Smiths & ‘Relax‘ by Frankie Goes To Hollywood
Closing song: ‘Angler’s Treble Hook‘ by $5 Fiddle