Well, I did. He performed at the Acme Comedy Club. He was very funny.

I (once again) recommended listening to his podcast, The Dana Gould Hour. I gave a few reasons why I enjoy it so much. And I told him that his is the only podcast I listen to in which I never feel compelled to speed through his ad reads. He suggested a possible reason for that…

Oh, Boy. Would you Guys Stop Doing This?

The internet keeps getting filled up with lies about this guy. And I keep having to tell the internet that there’s plenty of actual bad stuff about him that can be used to try to convince others to not re-elect him, you don’t have to make stuff up.
Does the president having improper feelings for his daughter? I don’t know.
The maker of this meme wants us to think he does. Sure, it might just be a joke, but there are some people who will think the middle and lower right photos aren’t fake. They are.
Even the images that haven’t been doctored can look wrong when just the right moment is chosen and the “Trump wants to bang his daughter” text is added.
The images came from the 2016 Republican National Convention. Ivanka Trump gives a speech and introduces her father. Watch the last 30 seconds on this video and the moment looks completely innocent.

It’s All About Timing

It may seem odd but drawing images can be subject to timing and pacing. These three images all have the same problem in that they flow awkwardly and that throws off the timing. The “punchline” comes at the wrong place.
In the comparison of Democrats and Republicans, which I drew because I couldn’t find the original, the punchline comes in too early. In the two Wonder Woman images, the same joke is ruined by the punchline coming in visually before the set-up.
Don’t you agree? Of course you do.
And Still No Decent Photograph Of Bigfoot 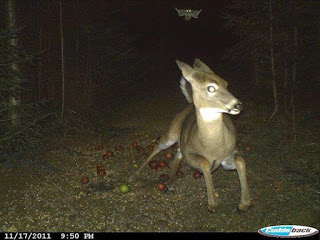 I spotted the above image on the Monster Talk Facebook page. It shows a deer that appears to be fleeing from a flying squirrel. It’s an eerie, yet cool image. And it must be a rare moment and still a photo was captured.
However, to this day there is still no decent photograph of bigfoot. Maybe some day.
Speaking Of Photographs Of Bigfoot
Could this illustration (above) by Mort Kuntsler for an article in a 1960 edition of True Magazine have been the inspiration for the bigfoot costume that was probably used in the Patterson/Gimllin film from 1967? (I heard about this article on the Squaring The Strange Podcast)
We can’t say for certain, but the bigfoots in the two images do share an interesting feature in common: Pendulous breasts.
A Dimland Radio Pedantic Moment And ARGH!: Recycling PSA On The Radio
I didn’t have the audio for this Public Service Announcement for recycling when I recorded the show, but you can listen to it here. I hate these sorts of ads. A repeated phrase, multiple voices, kids’ voices, and the ad doesn’t even tell you what it’s about until three quarters of the way through. I hate that!
And, kids, you ain’t growing up. You are no longer useful in your present state, you will rounded up, destroyed, and made into something else. That’s not growing up.
Three Cool Things

1) Speaking of bigfoot pictures, someone on the internets put the above images of Amelia Earhart and Patterson/Gimlin’s bigfoot together and made a truthful observation. It’s brilliant and funny. And that’s cool.

2) NASA’s Insight lander has successfully landed on Mars. Thus continuing our robot invasion of our red neighbor. COOL!
3) November’s daily drawing challenge of Crystalvember has come to an end. That might not be cool, but helping a Facebook friend have something to look forward to each day while dealing with a serious illness was very cool.

Dimland Radio opening theme song: ‘Ram‘ by The Yoleus
First ad break bumpers: ‘I Ran (So Far Away)‘ by A Flock Of Seagulls & ‘No Self Control‘ by Peter Gabriel
Second ad break bumpers: ‘Seven Seas‘ by Echo & The Bunnyman & ‘This Is The Day‘ by The The
Closing song: ‘Angler’s Treble Hook‘ by $5 Fiddle