October, Halloween, And Baseball Are Over

The Moment Of Silence Cough

Have you ever noticed that during a moment of silence there almost always seems to be at least one person who coughs. The further past three seconds the moment of silence lasts the chances of there being a cougher get to be nearly 100%.

What is going on? Sure, a sizeable percentage of the coughs are from people who just have to cough and they can’t help it, but it seems to me there are those who want to be able to say, “Did you hear that cough? That was me!”
I mentioned one cough in particular that came up in one of my favorite TV sit coms: The UK series The Good Life or Good Neighbors, as it is called in the US. Just prior to the end credits there was a bit of silence and there it was – a cough.
Go to the 29:49 mark in the video at this link to hear the cough.
One More Before I Put Baseball Away For The Winter

There was a World Series after all. I had to talk about it. Just a little. Didn’t I?

My Fixation On The Fans Behind Home Plate
I have a weird fixation, obsession even, with what the fans sitting behind home plate are doing during baseball games. There are the people who insist on getting on their phones to talk to someone watching the game on TV and wave to them. “Can you see me?” Yes, we can all see you. Knock it off.
There are those fans who seem to barely watch the game at all. You’re behind home plate. Those tickets are expensive. Watch the game! Check out the following sequence:
If that lady saw a third of the pitches thrown that game I’d be shocked. But, look to the right in the photos. The older fellow sitting in the front row. See how he’s watching each pitch in each pic? That man is Nolan Ryan, the legendary Hall of Fame pitcher. If you are going to a ballgame and you get to sit behind home plate, do me a favor, be like Nolan.

And Then There Were These Two

Also, this post season I noticed a couple of other people sitting back there behind home plate. One was a woman whose cleavage was prominently on display throughout the National League Division Series (NLDS). (Gee, I wonder why I noticed her?) She was keeping track of every pitch as she kept score during the games. I took to calling her Cleavage Lady.
The other person was a fellow dressed in the bright orange gear of the Miami Marlins. This guy was behind home plate for every game of the NLDS, the National League Championship Series, and the World Series. (Must be nice to be rich.) I called him Marlins Man.
Turns out Marlins Man is his nickname. (Kudos me!) However, the woman is better know as Front Row Amy.
These two characters have garnered a bit of fame from their ubiquity. There’s a write-up about Front Row Amy in the Milwaukee Journal Sentinel from July, 2012. And Marlins Man has is own page on Wikipedia.
Oh! And One More Thing About The World Series

As I did the show, it occurred to me that there wasn’t one instance of the singing of God Bless America during the World Series! At least I didn’t see it and I watched the games. In fact, I didn’t see any instances of that new tradition that Fox Sports and the Hated Yankees were trying to shoehorn into baseball in the wake of 9/11 this postseason.

Hallelujah!
Moving On From Baseball To Movies


I stumbled upon a two part YouTube video series on one man’s hypothesis as to what was really going on in Stanley Kubrick horror classic The Shining (1980). He believes that a major difference on the film from the book is that there are ghosts in the book. He believes the strange happenings in Kubrick’s version are due to psychic projection.

I found the videos to be very interesting and I think he makes some good points. He reaches a little here and there, but I think he might be on to something.
Here is part one and here is part two.
A Dimland Radio Pedantic Moment: They Are Not Twins!
While talking about The Shining, I brought up that the two creepy sisters that call for young Danny to play with them are not twins. At least not in the story. The actors who played the sisters, Lisa and Louise Burns, are twins, but during the interview scene Jack’s new boss states their ages were 8 and 10 when their father went crazy and killed them with an axe.
However, Jack’s boss also said the father’s name was Charles Grady, but when Jack is hallucinating (or is he seeing ghosts or is it a psychic projection?) later in the film he meets Grady. And Grady says his first name is Delbert.
So, was it just a slip of the tongue by the boss? Did he also get the ages of the daughters wrong? Maybe they were twins. Dang it, Kubrick! Way to mess up a pedantic moment.
Three Cool Things

1) All through October I and a few friends were posting a daily drawing as part of Drawlloween. Getting back into he drawing thing was very cool.

2) The drawing for the 27th was to be of a witch. I went with the Wicked Witch of the West as played by Margaret Hamilton in the great Wizard Of Oz (1939). It turned out pretty not bad. My wife even exclaimed, “Whoa, Jim! That’s awesome!” And that’s cool.
3) But Drawlloween came to an end and I didn’t want to stop the daily drawing challenge, so to honor a Facebook friend who is going through cancer treatment I decided to declare November to be #crystalvember. Her name is Crystal and in one of her CaringBridge posts she expressed disappointment with some of her friends. She felt they had abandoned her when she became ill.
I reached out to her husband, also a Facebook friend, to see if they would allow me to do a daily drawing challenge as a way to show Crystal she hasn’t been abandoned. (No, I don’t know her any better than being FB friends, but still.) He thought is was a great idea and gave me a few ideas for items to draw that Crystal would like.
A couple of my friends have joined in and a few other people have as well. Including Crystal! (When she feels up to it.) And you know what? You can join in, too! 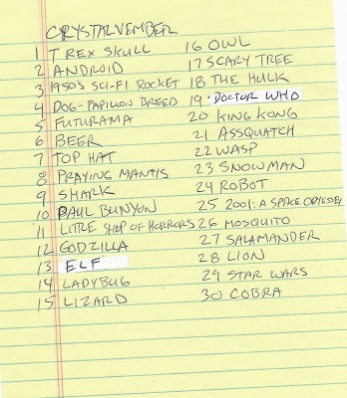 Here’s what you do: Download the list (above) and each day draw the item on the list whose number coincides with the date. It’s no big deal if you come in late. You can make up the other drawings if you want, when you want. Post the drawing on your Facebook page with the hashtag #crystalvember.

You don’t have to be a great artist. Just have fun.