Do those lyrics seem off to you? They do? That’s because the person who put this image together had to make a change in order for this to be insulting toward the President. There are a couple lines that have been changed, but the one that had to be changed for sure was, “Isn’t he a bit like you and me?”
What?! Oh, no. This is supposed to insult him, not suggest he would have anything in common with us.

It Was The Short Change Scam

While in line at the register at the grocery store, a fellow in front of me pulled off the Short Change Scam on the young, inexperienced cashier. I wasn’t paying attention as the scam began, but I did eventually see something was up. I wasn’t able to stop it and I’m not sure how I would, but I did speak up for the kid with his manager.
You can learn about the Short Change Scam here.

I believe in coincidences. I don’t think the universe is trying to tell me something when I think of a particular TV show theme song (Lost In Space) and, a couple days later, a friend asks if I can identify that same theme song. If the universe is trying to tell me something having to do with that theme, I have no idea what it could be.
It’s Not True: KFC Can’t Say “Chicken”
There’s an odd conspiracy theory that been going around the internets every since Kentucky Fried Chicken restaurants started calling themselves KFC in 1991. I spotted the meme above detailing the “real” reasons for the name change. KFC doesn’t use chickens. No, they use “genetically manipulated organisms” (it was early on, so the meme maker probably hadn’t heard the term genetically modified organisms yet), which the government says can’t be called chicken.
For crying out loud. It’s not true. On the KFC website the word “chicken” is used multiple times. And the original name is still at the top of every page.
Crisis Actors
It’s one of the newer conspiracy theories. The crisis actor. People who “they” send in to fake or over-dramatize major events, such as mass shootings. It’s ridiculous and disrespectful and needlessly cruel to those whose lives have been ended or touched be these tragedies.
Skeptic Bob Blaskiewicz gives a good overview of the crisis actor conspiracy here.
Top Three Cool Things Of The Week
Here’s Three Cool Things from this week. 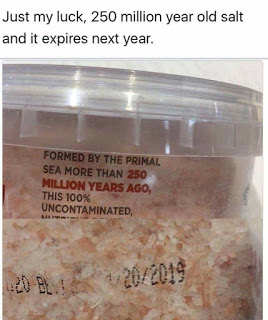 3) True, the stamp on the container is not giving an expiration date, but I still think it’s cool that someone had a little fun with this 250 million year old sea salt.
2) I spotted this live concert video of Cheap Trick from 1977. It’s nearly 22 minutes of some damn cool rock.

1) This will undoubtedly just be cool to me, but I’ve been encouraging old art school friends to post pictures from back in the day on Facebook. A few have shown up. Very cool!

Music heard on the show…
Dimland Radio opening theme song: ‘Ram‘ by The Yoleus
First ad break bumpers: ‘Inside A Fireball‘ by Hunters & Collectors & ‘Still Ill‘ by The Smiths
Second ad break bumpers: ‘Ahead‘ by Wire & ‘Love Is For Lovers‘ by The dBs
Closing song: ‘Angler’s Treble Hook‘ by $5 Fiddle