For those of you who don’t like sports, I start the show with sports. I couldn’t help but talk about this year’s Fall Classic. It was pretty damn entertaining.

She Knew The Jerk

While talking about the Series, I mentioned the jerk who grabbed a home run ball out of the hand of the woman who caught it and threw it back on the field. It is a tradition to throw the opposing team’s home run ball back and not keep it. The tradition started in Chicago with the Cubs fans. But the tradition is also to let the person catching the ball make the decision to throw it back.

Well, that fellow didn’t let her make the decision. Neither Joe Buck nor John Smoltz mentioned the break with tradition, but people on social media noticed it and took to commenting on what a jerk he was. I made a similar comment about the fellow on Facebook.

It turns out the jerk was the brother of the woman’s husband.

Pedantic Moment: Why Would You Take The Blue Pill

Another internet meme surfaced asking which option you would choose, see above.

Interesting choices, but why would anyone take the blue pill? You want to lose 20% of your brainpower?

It’s Not True: The People Only Use 10% Of Their Brains Myth

That blue pill option may have derived from the myth that people only use 10% of their brain power. Well, it’s not true. We use our entire brain.

Grief Vampires
I learned about Teresa St. Frances recently. She qualifies as what skeptics refer to as a grief vampire. I believe her to be sincere in her belief in her claimed abilities of being a psychic medium and animal communicator. She believes she can talk to the dead. And she offers her services to surviving loved ones of teens who have committed suicide.

That’s infuriating to this skeptic.

You can look at her site, but I won’t link to it. Just Google her name.

I will link to Steve Novella’s piece on grief vampires.

Top Three Cool Things Of The Week
Here are the Top Three Cool Things from this week.
3) A new 100 megapixel image of the moon.
2) Halloween! Although this year we didn’t have as many trick or treaters come to the house. 56 in all. Last year we had 99.
1) The World Series, of course.
Movie Recommendation: Deadline USA (1952) 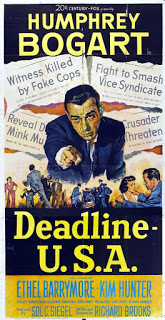 It’s been way too long since I’ve made a recommendation. Sorry about that.

I just watched this one a few nights ago. It’s a newspaper movie starring Humphrey Bogart as a serious newsman running a paper that might be sold to a competitor and shut down. Bogart’s character is determined to take down a notorious mobster who seemed untouchable.

Gritty and entertaining with Bogart being Bogart.

Dimland Radio opening theme song: ‘Ram‘ by The Yoleus
First ad break bumpers: ‘Rapture‘ by Blondie & ‘You’ll Have To Go Sideways‘ by The Soft Boys
Second ad break bumpers: ‘I Want The One I Can’t Have‘ by The Smiths & ‘No More Lonely Nights‘ by Paul McCartney
Closing song: ‘Angler’s Treble Hook‘ by $5 Fiddle