I Was A Baaaaaad Boy
This past Tuesday I was on my way to work and my impatience got the better of me. A fellow was making a left turn in front of me and I just couldn’t be bothered to wait five seconds. I passed him on the shoulder.
I was immediately pulled over by a member of law enforcement and handed a ticket. Great. Well, I only have myself to blame.
Defending The Indefensible

I understand why he thought there were so many people at his inauguration. I have seen photographic evidence that was taken, not exactly from his viewpoint, but quite close. From that angle it is very difficult to tell how much empty space there was. He only saw a sea of people.
I drew back a little of that slack when he and his press secretary continued to push the idea that there was a million plus in attendance. It’s hard to refute the images taken from the Washington Monument from the back and far above the crowd. That image made it clear that there were far less people there than in 2009.

If you are like me, whenever you watch an old detective show with a technician working a miracle by enlarging a little blob in a photograph into a detailed image, you shout at the TV, “It doesn’t work that way!” Well, thanks to science, there is now camera technology that can be zoomed in on and have amazing clarity. CNN used in on Inauguration Day.
It’s this image that I saw that helped me understand why Pres. Trump thought the event was “yuge.”
Taking One Item Off The List Of Appalling Behavior
In my continuing defense of the otherwise indefensible, I moved on to one of the most appalling examples of the appalling behavior of candidate Trump. Remember when he mocked a reporter by making fun of the fellow’s disability? It was sickening. “What can’t this guy get away with?” we all were thinking. And I was thinking it, too.
But, I’ve seen some video evidence of Mr. Trump making virtually the same gesture when talking about Ted Cruz, a general, the bankers, and himself. I can accept that the gesture, voice, and facial expression he made when he talked about that reporter, Serge Kovaleski, are the same as when he is showing someone to be flustered. I don’t think he was mocking a disability, he was mocking a reporter who happened to have a disability.
Of all the objectionable ideas, attitudes, and behaviors of Pres. Trump I’m willing to cross this one off the list.
Watch this clip and see if you might agree with me.
It’s Not True: Kellyanne Conway’s Gucci Stewardess Outfit And Women’s March Litter
Yes, I know “stewardess” is not the correct title, but the outfit looked as though it was from the 70s, so I used the term from that time. I also called it a sailor suit.
Anyway, it looked awful. We have now learned that Guicci and Armani (see Hillary Clinton’s grossly over-priced jacket) are capable of designing crappy looking clothes. What’s not true is that Gucci stole the design from an old dress pattern from the tackiest of all decades: the 1970s. 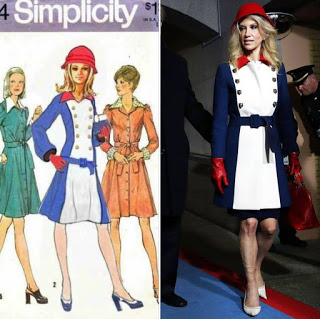 The image above is just some clever and well executed hoaxing. Someone found an old dress pattern package and altered the illustration on the front to make it look as though Gucci stole the design. Snopes quickly laid this one to rest.

Lest you think I’ve gone all right wing on you, I did mention the image (above) of the Women’s March picket signs all left on a sidewalk was not an example of littering. Much like the flowers that nearly buried the fence around Buckingham Palace after the death of Princess Diana, the signs were left as a message. Not a message of love is in the case of the dead Princess, but a message of protest toward America’s new President. Those signs were left, on purpose, outside of Trump International Hotel in Washington DC. It wasn’t the Women’s Marchers not caring about the environment.
The Sucker Punch Cheered ‘Round The World
I was rather disappointed by the reaction of some of my friends on the Left when video of white supremacist Richard Spencer getting sucker punched surfaced. Many were delighted. I understand the visceral enjoyment of such a moment, but this kind of action does not make things better.
Penn Jillette has said that the answer to bad speech is more speech. Sucker punching someone with whom you disagree does not help. It’s behavior akin to terrorism – scare the shit out of someone spewing bad speech by making them fear physical harm and they might shut up.
Yay! Big victory for you. But what hearts and minds have you changed?
When people start punching they stop listening.
I compared that sucker punch to the punch doled out by Buzz Aldrin some years ago. Aldrin’s punch was different. He was defending himself from a belligerent moon hoax conspiracy theorist. The nut was told to leave the second man to walk on the moon alone by both Aldrin and several other people in the vicinity. But the nut persisted and had Aldrin cornered.
The nut, who was taller, younger, and bigger than the former astronaut, was looming over Aldrin when he called Aldrin a liar and a coward. Buzz had had enough. He punched the nut in the face.
This was self-defense. The nut was repeatedly asked and told to leave Buzz Aldrin alone. Aldrin had tried to get away from the man. Finally, the tough old bird acted. There were no charges.
Aldrin was acting in self-defense. The cowardly anti-Trump protestor was attempting to shut up someone whose speech may be disagreeable, but is protected by the 1st Amendment. And I mean coward. The low level terroristic protestor’s face was hidden and once he took Spencer off guard with that punch he ran away.
I was further disappointed by some of my Facebook friends, who enjoyed the punch, when they tried to justify it because they think it’s OK to sucker punch Nazis. Well, kids, where does it stop? Who else is it OK to sucker punch? Who decides where to draw the line?
The 1st Amendment isn’t there to just protect the speech we like. It’s there to protect speech we don’t like. It’s there to protect the free exchange of ideas. If we start stopping ideas we don’t like from being voiced, how long before you’re the one with an idea that might be disliked?
A sucker punch wouldn’t be so funny then, would it?

I ran out of time this week, so you are on your own.