My Rocktober Tradition
I don’t know if I’ve done this every year, but I’ve told this story on or about October 2nd often enough to consider it a sort of tradition. The story is how I came to see The Who in concert for the first time on October 2, 1982 and it changed my life. I became a pretty good sized Who fan and my musical tastes were greatly influenced by Pete Townshend and company.
The Singer?!
So, it’s happened.
On Facebook the other day someone shared a video of The Rolling Stones performing ‘You Can’t Always Get What You Want’ as part of their Rock and Roll Circus concert special of 1968. The concert featured the Stones as well as Jethro Toll, The Dirty Mac Bird (John and Yoko’s band for the film), Marianne Faithfull, and The Who. I goofed on the show, because I thought it had been released back then, however it wasn’t because the Stones didn’t want it released. They felt they had performed badly and others thought it was because The Who’s performance was so good.
In 1996, the film was finally released.
Anyway, there’s the video of the rather young looking band of classic rockers and someone made a comment on how “the singer” looks a lot like Ashton Kutcher on That 70s Show. “The singer?!” The fellow just couldn’t think of Mick Jagger’s name.
Well, it had to happen some day when people would be too young to know the members of such an iconic band.

Here’s The Who’s kickass performance (with Pete Townshend interrupting with the story of the song).

It’s Been Done
I got to thinking about a Garth Brooks TV concert special that aired in the early 90s. I can picture the commercials for the TV event that I really didn’t give a damn about, because Garth Brooks just was never my thing. And I remember one specific thing about that ad: It showed Brooks and a member of his band smashing two acoustic guitars against each other. I remember a person I knew at the time remarking on how valuable those guitars were. I also remember saying, “It’s been done.”
Pete Townshend may not have been the first rocker to smash his instrument in concert (the internets say Jerry Lee Lewis was), but he was the one who made it a statement-making, show-ending tradition that might have bankrupted The Who had not Tommy become such a massive financial success.
I made the point that when The Who destroyed their instruments (just Pete and Keith Moon really) it meant something. It was was a very costly statement on the self-destructive nature of man. We were living under the shadow of “the bomb”. It was art.
OK, it was a gimmick, too. And it lost it’s meaning when The Who became wealthy enough to afford it. Garth Brooks was already awfully damn rich when he was smashing those expensive guitars, so really…yawn.
It’s been done before. And done better.
A Different WHO Made The News
The World Health Organization (WHO) announced earlier in the week that measles had been eradicated in the Americas. After decades of vaccinating the population against that dreaded disease (people think of it as just a kid’s disease, but it was responsible for the worldwide deaths of 2.6 million people a year), WHO could safely state the endemic transmission of measles was no longer happening in the Americas. The incidents of measles outbreaks in recent years were due to unvaccinated people traveling aboard and bringing it back with them and then spreading it to other unvaccinated people.
No thanks to Andrew Wakefield and Jenny McCarthy, the measles vaccine has worked in the Americas and is working in the rest of the world. We must keep vaccinating if we want to make measles go the way of small pox. It can be done.
No Crying In Baseball? Bullshit
Sure, it’s a great scene in the movie A League of Their Own, but it couldn’t be farther from the truth. There’s plenty of crying in baseball.
Mike Schmidt announcing his retirement.
Pete Rose breaks Ty Cobb’s hitting record.
Joe Torre gets his first World Series Championship as manager of the Hated Yankees. 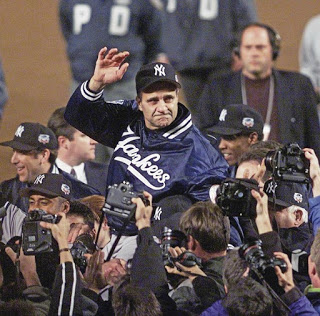 Movie Recommendation: None
I ran out of time. You’re on your own this week.