Some Customers Are Just A Bit Too Demanding Too Soon
I told the story of a recent customer for whom we only cleaned once and they were already making demands. They didn’t think one cleaning person was enough. They wanted our cleaner to use a back pack vacuum cleaner to do the full vacuuming. That’s not what they are made for. It would take forever. They were worried we’d be using the same mop in the restrooms and in their suites. We wouldn’t be, but what difference would it make?
It became clear we wouldn’t be able to meet their expectations, so we dropped them. When I returned the keys, the assistant to the boss making all the demands apologized to us about the whole thing. She seemed weary from having to deal with this issue and told me this problem went back to the building they had been in before.
We hate to turn away business, but I think my boss made the right decision.
Another Fallacious Meme

Take a look at this graphic I spotted on Facebook… 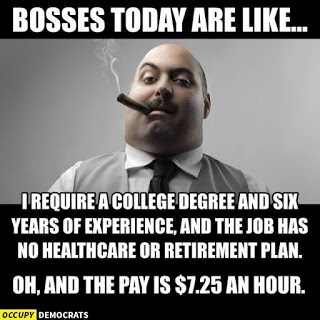 This immediately set off my “Really?!” response. Do the fine folks at Occupy Democrats think there are companies in America that require a college degree and six years experience and only pay $7.25 an hour?
Perhaps, as it has been suggested to me, I am too literal-minded on this one. Maybe Occupy Democrats were trying to be extreme to make a point. Maybe, but they commented, “Too true!” in their original posting of the image.
I am concerned that other literal-minded but less skeptical folks will think there are fat cat business owners in our country who are doing just what the graphic states. They aren’t. They might want to, but they aren’t.
Five Years Of Not Finding Bigfoot

An article on io9 asked a couple of the (not) Finding Bigfoot fellows why, after five years (!), have they not produced any good video footage of a bigfoot. They, of course, had their reasons: There are only 10,000 or so. They live in vast areas that are very remote. They are intelligent and avoid cameras.
Well, maybe. But maybe they just ain’t there. Maybe these guys are just chasing phantoms (and ratings).
This led me to wondering about all the wonderful photographs of rare and/or endangered animals in the world. Their numbers are small and they live in remote areas, some vast. Obviously, they aren’t smart enough to avoid having their pictures taken:
The tiger.
The giant panda.
The mountain gorilla.
The wolverine.
The blue whale.
Nice pictures of these animals. Yet, still no pictures of bigfoot. Well, no good ones. Plenty of fuzzy photographs and shaky videos exist.
Homeopathy Is Still Silly And Still Doesn’t Work
And it’s still a waste of your money. I found out about two more homeopathic “remedies” that are quite baffling: One relieves symptoms of EMF sensitivity, but what is the active ingredient? The other is a sleep “remedy” derived from owls. I’m not making this up, but someone is and they are making money off of, at best, the placebo effect.
Straight up! Homeopathy has no active ingredients in it. It’s just water. There is no mechanism by which it could work. Stop wasting your money.
A Couple Wins For Skepticism
Travis of the Minnesota Skeptics group told me about two cases in which skepticism managed to win the day. One involved a 9-11 Truther attending several MN Skeptic meet-ups and having discussions with the skeptics about how the standard model explanation of that day is supported by all of the evidence. They were gentle and respectful in their making the case with this fellow. He looked into it a little deeper and examined the evidence. Eventually, he came around to seeing how the Truthers were seeing conspiracies everywhere and they were wrong. A win! However, he never attended another meet-up after he said he was convinced by the skeptics.
And, more personally, Travis told me about how he convinced a friend from high school that Ouija boards are bullshit. They have no abilities to connect with the other side (if there is one). They are not portals through which demons can enter our realm.
He wasn’t having much luck, until he hit on an argument that worked right into her professional expertise. She was a lawyer working in patent law. Travis asked her if she really thought that Parker Brothers (owners of the Ouija board trademark) would be so willing to open themselves up to lawsuits, if they actually believed their product (a poster adhered to a piece of cardboard) could summon demons.
The light turned on and she was convinced.
10 points, Travis!
Pertussis On The Adam Carolla Podcast?
I’m not a doctor. Really. I’m not. But I heard something on a recent Adam Carolla podcast that made me recoil in horror. No, it wasn’t hearing Adam go on (goon?) again about how he thinks the classic children’s book Where the Wild Things Are is terrible. (Although that does tick me off. I talked about it at length on show 232 from 6/20/15.)
What I heard was in the background of a call into the show. A young father called to take part in a comedy segment, while in the background we could hear a young child hacking up a lung. It was not the typical kid’s cough. This sounded to me like the cough people get when they have pertussis (whooping cough).
No one, not the father on the phone or anyone on the show, Adam included, took any noticed of that cough. I sure hope that child is getting the proper care, if he in fact has pertussis.
That made me wonder if that father was anti-vax. It is possible the child was too young to be vaccinated. That made me wonder about the herd immunity of the community in which that child lives.
Vaccinate, people!
Here’s an open letter from a pair of Australian parents who thought they were doing everything right, but because of the extremely low vaccination rate where they live their new-born daughter contracted pertussis and died.
Movie Recommendation (TV Movie Edition): Ike: Countdown to D-Day (2004)
You’ll have to send away for it on Netflix, but it is worth it.
This World War II drama doesn’t feature any battles other than political ones. It follows General Eisenhower from convincing Winston Churchill that he should be the Allied Supreme Commander in Europe to the day of the invasion of the continent of Europe in June, 1944.
It stars Tom Selleck as Ike in a wonderfully understated performance. Ike was not a demonstrable guy. He was calm and cool headed and Selleck plays him brilliantly. This is a fascinating film with fine performances throughout.
Put it in your queue.
Music heard on the show…
Dimland Radio opening theme song: ‘Ram’ by The Yoleus
First ad break bumpers: ‘Message of Love‘ By Pretenders & ‘Rock’n’Roll High School‘ by Ramones
Second ad break bumpers:  ‘Tony’s Theme‘ by Pixies & ‘It’s Obvious‘ by Au Pairs