As is my tradition for the last couple decades, I think, I made my annual resolution to live to see the next year. So far, I have kept the resolution. However, one of these years…
I also mentioned four people who didn’t make it to 2016. Wayne Rogers, Natalie Cole, Meadowlark Lemon, and Lemmy Kilmister all died within just days before the new year. That brought up a quick addressing of the whole celebrities die in threes myth and I talked about how Lemon was a member of that Harlem Globetrotters team that the public knew best. We knew two of the team by name, Meadowlark and Curly, and that team even had a Saturday morning cartoon.
A small amount of politics worked its way in when I mentioned there’s a university in our country that has a 100% accuracy rate at predicting who will be President. Western Illinois University has correctly predicted the winning candidates since 1975. Not bad.
So, who are they saying will be our next Commander-in-Chief? Bernie Sanders.
We’ll just have to wait and see, won’t we?
I also mentioned that Cheap Trick was inducted into the Rock’n’Roll Hall of Fame. It would be a great honor, but Steve Miller got in, too. Cheap Trick is very underrated and they’ve always been great live, at least, the half a dozen times or so that I’ve seen them.
Science! Yeah!

This was a slightly uncomfortable topic for me. There’s a science series on UK TV called A Girls’ Guide to 21st Century Sex and there is a couple minute clip demonstrating what happens during heterosexual intercourse in the missionary position. They put cameras everywhere! Inside and out.

It’s all in the name of science, of course. This was the hottest science I’ve ever seen!
However, I did take issue to the mentioning of the G Spot as though science has established that it is real. From what I can find, the evidence for the G Spot is mostly anecdotal and very weak. Science has yet to determine it exists and they’ve been looking it for decades. It may just be that some women may have a sensitive area within their naughtiest of naughty bits, but it seems more likely to be a myth.
Now, I need to watch that video a few more times. For science!
Pedantic Moment: Licorice Is Black
This is an old pet peeve of mine. I’m sure I’ve talked about on the show before, but here I go again.
Folks, licorice is not a texture. It’s not a shape. It’s not a color. It’s a flavor! The red stuff is either strawberry or cherry, but it’s not licorice.
Well, in recent years, I’ve been seeing packaging calling the red stuff licorice. That didn’t used to be the case. There used to be (and still are) strawberry Twizzlers or cherry Nibs and licorice Twizzlers and Nibs, but now some candy makers are calling all of it licorice with a separate listing of strawberry, cherry, or the many other flavors available.
Walgreen’s DeLish store brand offers red and black, calling both licorice. It’s red is strawberry, while its black is listed as classic black flavor. 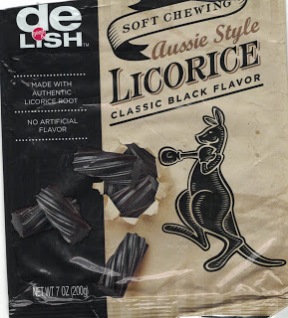 Classic black flavor? Setting aside the ethnically insensitive sex jokes, just what does black taste like? Pepper? Burnt toast? Asphalt? Ink?!
Could it taste like LICORICE?!
This is a battle I just have to accept I’ve lost.
Star Wars! Nothing But Still More Star Wars!
As you know, Star Wars: The Force Awakens is doing phenomenally well and, in the opinion of many including me, it is excellent. Sure, it ain’t perfect, but it just feels right and has me excited for the next installment.
But, there have been a few nitpickers and complainers who just can’t be satisfied. They claim it’s nothing but a remake of the original Star Wars. They don’t know enough about what happened since Return of the Jedi. Carrie Fisher got old and can’t fit in the slave girl bikini anymore. Whine, whine, whine.
Some people are never happy. The point made by one reviewer over the complaints of it being too similar to the originals, while the same people complained the prequels weren’t enough like the originals, “What do you want?!”
I mentioned a couple spoiler reviews. I will link to them, but don’t forget they do contain spoilers. I’ll even include a few spoiler reviews I didn’t mention on the show. SPOILERS! There. You have been warned.

Chris Stuckman’s review.
Adam Savage’s review.
Geeks Without God’s review.
Movie Recommendation: None
I ran out of time, so you are on your own this week.
Music heard on the show…
Dimland Radio opening theme song: ‘Ram’ by The Yoleus
First ad break bumpers: ‘Ace of Spades‘ by Motorhead & ‘New Year’s Day‘ by U2
Second ad break bumpers: ‘New Day Rising‘ by Husker Du &  ‘New Dreams‘ by Naked Raygun