In Search Of Has Arrived
I succumbed to my personal nostalgia and purchased the In Search Of DVD collection. The entire series of pseudoscience arrived Friday and I’ve begun binge watching it. Maybe I shouldn’t have bought it, I mean how many times will I watch the shows? But the price was good and my younger self really wanted it.
Perhaps I should do a dissection of each episode. But, that would be a fair amount of work though.
Congratulations Cosmos
The Emmy awards were handed out recently and the Fox science series, ‘Cosmos: A SpaceTime Odyssey’ picked up four awards. The series had been nominated for 12 awards. Its four wins were:
Outstanding Original Main Theme Music
Outstanding Sound Editing
Outstanding Writing
Outstanding Music Composition for a Series.
Maria Menounos Was A Millionaire At Age 23 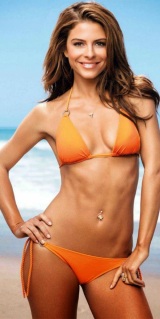 I’m just sayin’.
Talk about bragging rights at the high school reunion, television presenter, Maria Menounos was a millionaire by the time she got to age 23. I wondered (probably unfairly, although I tried to be fair) how the fact she’s a stone cold babe helped her achieve that financial status. She is smart, quick-witted, talented and very good at what she does, but if she had a face for radio…
Firewalking Ain’t No Big Thing

Ms Menounos, while a guest on the Adam Carolla Podcast, talked a little bit about motivational speaker Tony Robbins and firewalking. I don’t know much about Tony. I know what he’s famous for and maybe he helps people, but I’m leery of the whole motivational thing.

Firewalking, on the other hand, I have learned that there ain’t much to doing it. Yes, a person needs to wrap their mind around actually doing it, but if the hot coals are prepared properly and one walks quickly, there is little chance of getting burned, even if the coals are measured at 750 degree F.
Walking barefoot across a metal grill used at the local Wendy’s while heated to half that temperature? That’s a different matter. No about of motivation will prevent someone from getting horribly burned.
Here’s the science behind firewalking.
More Police State Talk 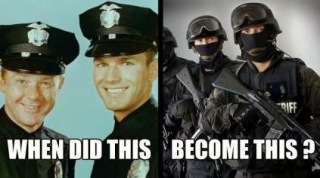 I don’t exactly agree that we live in a police state, but I could be ignorant and naive. I talked about a meme I saw comparing friendly neighborhood TV cops to today’s jack-booted thugs. The examples I gave for the TV cops were Andy and Barney of The Andy Griffith Show and Pete and Jim of Adam 12. They were the “aw shucks” form of TV fantasy 60s/70s law enforcement.
I also gave real world examples of the jack-booted thugs from those same time periods. Reality is way more complex than the meme suggests. Take a look at what some cops were doing in 1963 and 1968.
The $100,000 Shifting The Burden Of Proof Challenge

Internet preacher and ball cap wearer, Joshua Feuerstein has issued a $100,000 Challenge to atheists. He’s challenging atheists to prove his god doesn’t exist. Joshua, that’s not how it’s done. Those making the positive claim – God exists – have the burden of proof. The nonbeliever does not have that burden.

A few YouTubers and others have responded to the challenge. I include links to three of them. Two of them are very good responses, Bionicdance’s and the Thinking Atheist’s, but Cult of Dusty’s isn’t so good. Sure, Dusty makes a good point or two, but he smothers them with his vitriol and ad homenim attacks.
You can see for yourself:
Cult of Dusty
Bionicdance
The Thinking Atheist
Hey, Spider-Woman! Nice Bu…Whoa! Spider-Man! Have You Been Working Out?

Apparently, a variant cover of a recent issue of the Spider-Woman comic book has raised a few…eyebrows. Spider-woman is depicted climbing onto a rooftop with her butt in the air like she just don’t… Anyway, her costume also appears to be painted on her body. Well, duh! Superheroes have been drawn as though they were naked for decades. Sure, the anatomy has gotten more accurately drawn as the artists got better and society’s standard more accepting of that way of depicting superheroes, but they’ve been drawn estentially naked since I started buying comic books in the 70s.

Maddox of the Best Show in the Universe does an excellent take down of the outrage over Spider-Woman’s butt. Be warned the video in this link is NSFW.
Movie Recommendation: Crazy Heart (2009) 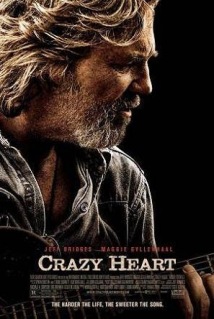 I really enjoyed this movie. Jeff Bridges (who won an Oscar for this role) plays “Bad” Blake, a country singer whose career had seen better days. “Bad” now drives himself to low paying gigs at bowling alleys and small time honky tonks. He still has his chops, but his drinking has pushed him off the main stage and he stopped writing songs. Enter a young single mom (Maggie Gyllenhaal) who seems to give “Bad” a reason to give a damn again.

Two near miss tragedies also give “Bad” a reason to clean up his act. Bridges is wonderful as the messed-up, but always charming “Bad” Blake. And there are times I swore I was looking at Kris Kristofferson.
I knew I really enjoyed this movie, because as it was getting to the end I found myself wanting to spend more time with “Bad”.
Music heard on the show…
Dimland Radio opening theme song: ‘Ram’ by The Yoleus
First ad break bumpers: ‘Never Talking to You Again‘ by Husker Du & ‘Next Position Please‘ by Cheap Trick
Second ad break bumpers: ‘New World Man‘ by Rush & ‘No Language in Our Lungs‘ by XTC
Closing song: ‘Angler’s Treble Hook’ by $5 Fiddle
That’s it! See you next Saturday night for Dimland Radio 11 Central, midnight Eastern on www.ztalkradio.com you can also download my show from the z talk show archives page. You can email your questions and comments to drdim@dimland.com
You can also go to my CafePress store and buy stuff with my artwork on it and have me do a portrait for you if you like. Find out more here and here.