The Storm Of The Day!
I started the show talking about the weather.  I knew we were going to get some snow, but I was told earlier in the day that the amount of snow would be more than originally predicted.  Batten down the hatches, everyone!
Dimland Radio’s War On Christmas

Why should Fox News have all the fun?  I jumped into the “War on Christmas” by ranting about the guilt imposed on me by the bell ringers of the Salvation Army at the entrances of the stores I frequent.  And I went on about a car ad campaign featuring a very Santa-like salesman.  The jokes of the ads center around the salesman possibly being the gift-giver himself.  One ad in particular is very funny.  Or it was last year, but this year it was changed a little and the humor was diminished by that change.

I also mentioned Penn Jillette’s take on the fictitious war.  You can listening to Penn’s take here.  And, although I didn’t mention it on the show, Jon Stewart has a very spot on take on this whole mountain-out-of-a-molehill business.
JFK, GHWB, and BE 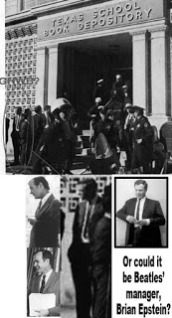 Or maybe it’s just some other guy?

There’s a conspiracy theory out there that says that President George Herbert Walker Bush had something to do with President John Fitzgerald Kennedy’s death.  There’s a picture from the day, shortly after the assassination, showing, among others, a man in a grey suit standing by the Texas School Book Depository building.  He does look kind of, sort of, possibly similar to a man that might maybe be GHWB.  But there’s another person it might be… Beatle’s manager, Brian Epstein!

The image just isn’t clear enough to be certain who it is, but I think it’s BE!  What was he doing November 22, 1963?  DOES ANYONE REALLY KNOW?

Wanna Feel Old?
‘War Games’ will turn 30 years-old in 2013.  The classic film is about a couple of teenage kids unwittingly hacking into NORAD’s missile launch control computer.  This sets of a series of events that brings the world perilously close to nuclear war.  In those days there was a palpable fear that President Ronald Reagan was going to get us into a nuclear war with the Soviet Union.  It didn’t happen.  (Spoiler!)

A couple things about the movie stood out.  One was the amount of advancement our technology has made in those 30 years.  The other was how upset my wife got when the two teenagers remarked about how old some fellow was when he allegedly died.  He was 41 years-old.

A couple weeks ago my wife had turned 41 herself.  Poor Honey Bunny,  you’re not old. 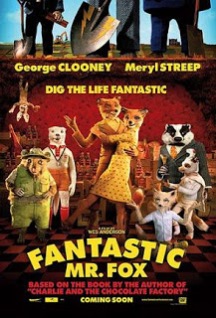 Twentieth Century Fox
A sweet, quirky, wry, and vulgar family movie by director Wes Anderson.  Anderson’s movies are all a bit odd and that’s what I like about them.  ‘Fantastic Mr. Fox’ is also odd and I like that.  It’s not really vulgar,  The characters, voiced by George Clooney, Meryl Streep, Bill Murray, Michael Gambon, and others, use a lot of profanities, but instead of saying the actual word or bleeping it, the characters say, “Cuss”.  As in, “What the cuss?” or “You cussed that up.”  (I’m not sure those are actual quotes, but that’s the general idea.)
Music heard on the show (Whenever Possible, I Will Link To The Song)…
Dimland Radio opening theme song: ‘Ram’ by The Yoleus
First ad break bumpers: ‘Nobody Told Me‘ & ‘Beautiful Boy (Darling Boy)‘ by John Lennon
Second ad break bumpers: ‘Woman‘ & ‘(Just Like) Starting Over‘ by John Lennon
Closing song: ‘Angler’s Treble Hook’ by $5 Fiddle
That’s it! See you next Saturday night for Dimland Radio 11 Central, midnight Eastern on www.ztalkradio.com you can also download my show from the z talk show archives page. You can email your questions and comments to drdim@dimland.com
You can also go to my CafePress store and buy stuff with my artwork on it and have me do a portrait for you if you like. Find out more here and here.