Snow Driving Again
I started the show with recounting my Thanksgiving Day driving fun on the way home from the family festivities.  It wasn’t the worst driving conditions, but I was glad to be home, I can tell you.
Pants

This had been a topic I had been trying to get to for a couple of weeks, but so other topic kept getting in the way.  Well, finally, the topic of pants would get its due.

I started going on about short pants and my disdain for them.  Wearing them, I mean, they’re fine for other people, but I just hate them.  My dad isn’t that fond of them either.

And then there’s this whole sagging pants thing.  Which I turned into…

Brilliant, ain’t it? Wish I thought of it.

Perhaps you’ve heard that sagging pants originated in prison as a signal to other inmates as to the availability for sexual encounters.  Well, although the “pants on the ground” look did originate in prison, it doesn’t mean the “wearer” is ready for some action.

Snopes.com comes to the rescue again.

Or watch them on Letterman.

I knew Pete Townshend was into spiritualism and such.  I didn’t know he dabbled in pseudoscience.  He and Dave talked about suffering from tinnitus, nerve damage in the ears that cause a constant ringing sound.  In fact, I have nerve damage in my left ear.

Pete said he’s been treating his tinnitus with “a lot of New Age stuff” and working with a homeopathic doctor.  Oh?  Well, he says it’s working and maybe it is, but since his claims are subjective it’s difficult to know for certain that the “alternative medicine” is working.

Maybe it is, but I have my doubts.  Especially about homeopathy, which if it’s being done right has NOTHING in it.

Movie Recommendation: The Man With The Golden Gun (1974) 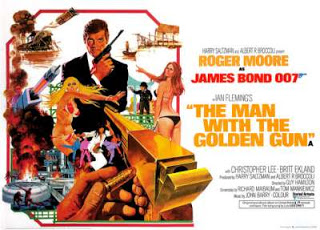 United Artists
An excellent villain played by Christopher Lee.  A creepy sidekick play by Herve Villechaize.  Britt Eckland in a bikini.  And a good one on one confrontation between Bond and the villain in a cool setting.  And the energy crisis.  What else could you want?  Sean Connery as Bond?  Well, you can’t have everything and Moore was a pretty good Bond until the series got too campy and silly (Octopussy, anyone?).
Music heard on the show (Whenever Possible, I Will Link To The Song)…
Dimland Radio opening theme song: ‘Ram’ by The Yoleus
First ad break bumpers: ‘Escape From Planet Earth‘ by The Alley Cats & ‘Crummy Stuff‘ by Ramones
Second ad break bumpers: ‘The Unheard Music‘ by X & ‘Homosapien‘ by Pete Shelley
Closing song: ‘Angler’s Treble Hook’ by $5 Fiddle
That’s it! See you next Saturday night for Dimland Radio 11 Central, midnight Eastern on www.ztalkradio.com you can also download my show from the z talk show archives page. You can email your questions and comments to drdim@dimland.com
You can also go to my CafePress store and buy stuff with my artwork on it and have me do a portrait for you if you like. Find out more here and here.