And Now A Little James Randi
My friend, Chris Brown, got to hobnob with several skeptics in high standing at the recent NECSS event.  He dropped my name and how I do a skeptic-themed show on a paranormal network.  James Randi was impressed and signed a photo just for me.  Amazing! 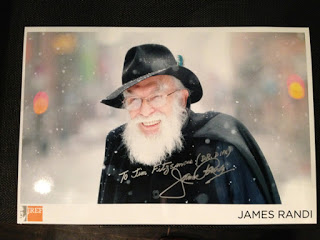 The Amazing Randi signed just for me!
I also did a little compare and contrast of Randi and self-proclaimed psychic Chip Coffey.  Pretty much the way fans of Chip Coffey feel about James Randi is the way I feel about Chip.  We, skeptics, don’t think highly of Chip mainly do to one thing – the child exploitation program Psychic Kids.  Here is an article voicing the skeptical concerns raised by the paranormally admired Chip Coffey.
Another Facebook Meme 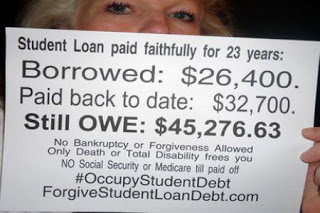 This one just doesn’t smell right.  Can it be true that the woman in the photo (above) will really be paying her student loan for 55 years?  Something just doesn’t add up.
It’s Not True: The Baby Boom 9 Months After The NYC Blackout In 1965
Pulled off the pages of Snopes.com is this nugget of the NYC blackout in 1965 did not lead to a spike in the birth rate nine months later.  You can read about it here.
I’m Sure He’d Be There, If He Hadn’t Been Dead For 34 Years
Organizers of the London 2012 Olympics requested the management of rock legends The Who if Keith Moon could play during the ceremonies.  There’s one problem…Keith Moon has been dead since 1978.  Read more about this oversight here.
I also mentioned Moon’s dangerous drug and alcohol-filled lifestyle which lead to his death.  It also lead to him passing out during a concert that prompted Pete Townshend to ask if anyone in the audience knew how to play the drums.  Someone did and he got to be a rock star with the greatest band ever, if just for one night.  Learn more about it and watch the footage of Keith passing out here. 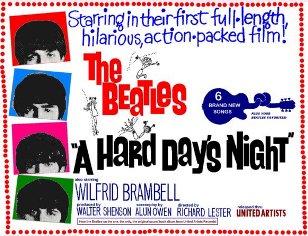 This was The Beatles’ first feature film and it’s a blast.  The Fab Four do a great job playing themselves in a day in the life of the world’s most popular and influential band.  Great fun!

Chris Brown’s son Ethan is putting on an event to benefit his local library. The event is tied in with the number Tau (6.28) which is 2 x Pi (3.14). Ethan will be attempting to recite from memory Tau out to 2000 places and people can pledge a certain amount per digit to help his library. The event is to take place May 6, 2012.

You can learn more and pledge to this fine cause here

Dimland Radio opening theme song: ‘Ram’ by The Yoleus
First ad break bumpers: ‘Under Pressure‘ by Queen & ‘The Queen And The Soldier‘ by Suzanne Vega
Second ad break bumpers: ‘I Don’t Know‘ by Naked Raygun & ‘Erica’s Word‘ by Game Theory
Closing song: ‘Angler’s Treble Hook’ by $5 Fiddle
That’s it! See you next Saturday night for Dimland Radio 11 Central, midnight Eastern on www.ztalkradio.com you can also download my show from the z talk show archives page. You can email your questions and comments to drdim@dimland.com
You can also go to my CafePress store and buy stuff with my artwork on it and have me do a portrait for you if you like. Find out more here and here.