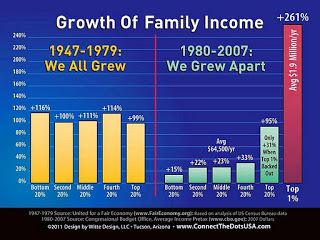 “Note that this disparity began with Reagan’s ‘trickle down’ economics and rewriting the top tax brackets so the rich paid MUCH less–and now we have income disparity like some 3rd world dictatorship…”
(I will make the concerted effort not to identify the person quoted here. I don’t want to be “that guy.”)

This quote was found on Facebook included with the graphic above. The graphic purports to show the income growth disparity from the period of 1947 – 1979 and the period 1980 – 2007. The implication of the graph and the explicit statement in the comment lay the blame for this alleged income growth disparity at Pres. Ronald Reagan’s doorstep. It was his “trickle down” economics that was responsible.

Thanks to several sharp-eyed internet skeptics (your humble writer included) the graph and the commenter were called out on the misleading nature of the information presented. As I’ve stated in a previous blog, numbers can lie even while telling the truth. The following is a short list of what’s wrong with the graphic’s implication.

– The two time periods compared are of differing lengths (32 years vs 27).
– The top 1% is not separated out from the top 20% on the part of the graphic showing when “we all grew.”
– The two time periods are taken from two different sources and therefore should not be compared.
– There is no indication of adjusting for inflation.
– There is no indication of the growth of GDP over the two periods.
– The graphic arbitrarily chooses the cut off line between the two periods in order to imply that Pres. Reagan’s economic policies are to blame.
– Ronald Reagan did not become president until January 20, 1981 and his economic policies, after making compromises with the Democratically-controlled Congress, did not take affect until much later.

That last point says it all and not just because it was my contribution to the rebuttal comments to the person I quoted at the top. This chart clearly shows an anti-Reagan and anti-Republican bias. As does the quote. If 1980 was the last year of Pres. Jimmy Carter’s term in office, how can Reagan be blamed for the income disparity in 1980 and in most of, if not all of, 1981? But the casual viewer of that posting in Facebook will almost certainly come away thinking that it’s all Reagan’s and those evil Republicans’ fault.

This is especially distressing to me. Not because I’m a great supporter of Ronald Reagan (I’ll keep that to myself), but because the person I quoted is supposed to be a skeptic. The person is well-known to most of us skeptics. And well-respected. I’ve heard the person interviewed, give talks and have read much of what they have written (blogs away I haven’t gotten to the books yet, but I will).

This person is a scientist. But also human.

I’m a Facebook friend of this person and that’s how I spotted their posting. I’ve also seen other postings that clearly indicate this person is a supporter of Pres. Obama, the Democrats, and even the Occupy movement. Now, I’m not saying that I’m not a supporter of them as well (I’ll keep that to myself), but it seems to me that when politics get involved, even the most scientifically minded and the most ardent skeptic can be susceptible to confirmation bias. That is: my guys are good; you’re guys are bad and I accept only that evidence, no matter how flawed, which confirms my position.

As of this writing, the skeptic has not addressed the many reasonable illuminations of the problems of the graphic. Nor even admitted they could be wrong.

2 thoughts on “politics and skepticism”