Another reason I don’t like the way local TV stations report on the local connection to any not local story. Am I gonna care more if I know someone from my home state was involved in a plane crash in Spain? I doubt it.

The joys of being a homeowner! I talked about dealing with ants taking over the window ledge in the bathroom. Some vacuuming and laying down of ant poison seems to be working.

“Dad, win me one of those angry birds!”

I took the wife and son to the county fair last weekend and my son wanted to win a stuffed angry bird. I was apprehensive, but did it anyway. Less than 10 minutes later (and my wallet $25 lighter) he got his angry bird. Hopefully, both he and I learned the lesson to just not get involved in the whole game of chance ever again.

It’s Not True: The Piltdown Man 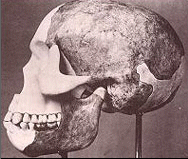 I gave a talk about the hoax that was the Piltdown Man. Piltdown Man was a set of fossils of skull bones and some teeth that were thought to be about 500,000 years old. If true, that would not fit the established timeline of human development. The hoax stood for more than four decades before exposure.

The story is an illustration of how science can be mistaken from time to time and that more science is what corrects those mistakes.

The Texas Board of Education decided 8-0 to keep creationist educational supplements out of high school biology classes. A win for science and reality. Movie Recommendation: Harry Potter & the Deathly Hallows Part 2

We saw it today. Very good. I think it was a satisfying end to the film series. The revelation of Snapes’ past and his words to Harry were very touching.

Dimland Radio opening theme song: ‘Ram’ by The Yoleus
First ad break bumpers: ‘Shaken But Not Stirred’ by The Red Guitars & ‘Hiding Out’ by Peter Dennis Blandford Townshend (Yes, that’s his full name.)
Second ad break bumpers: ‘Another Nail In My Heart‘ by Squeeze & ‘Something I Learned Today’ by Husker Du
Closing song: ‘Angler’s Treble Hook’ by $5 Fiddle
That’s it! See you next Saturday night for Dimland Radio 11 Central, midnight Eastern on www.ztalkradio.com you can also download my show from the z talk show archives page. You can email your questions and comments to drdim@dimland.com