The dapper George Hrab
This week was part two of my interview of the totally awesome George Hrab.
But First A Little Tale About A Dead Volvo 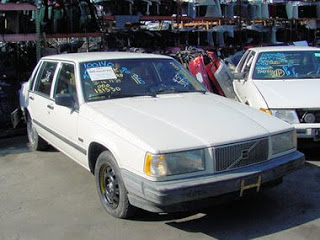 A dead Volvo ain’t no fun!

My wife’s car finally decided it had had enough. It was a 1990 Volvo 740 GL and had well over 200,000 miles on it. We bought the car for $1200 a little over four years ago and, despite the age and mileage, we really didn’t have to put much money into it. But, Thursday morning, as Amy (my wife) was returning home from dropping our son at school, the Volvo’s transmission went kaput.

Well, as the tow truck driver put it to me after I told him what I just told you, “That car doesn’t owe you a thing.” It’s true, but now we’re back to being a one car family for the foreseeable future.

Take a look at these hands!

This part of our interview centered almost exclusively on Geo’s music. Geo talk’s about how he gets his ideas and how he dealt with writer’s block. I gushed over him a couple of times, but Geo handled it with ease. He’s so great!

If you missed either part, you can download both from the Show Archives at ztalkradio.com.

If you haven’t heard his podcast, you should! Be warned Geo will use some profane language on his podcast, but you’re an adult, you can handle it. You can download, for free, the Geologic Podcast from iTunes or you can go here to listen to it and see his show notes and even make a comment if you like.

In a spur of the moment stroke of genius, I decided to have my guest recommend a movie. Geo suggested the documentary ‘Young @ Heart’. The film follows a senior citizens’ choir who perform contemporary music. Pop, rock, punk, this group gives the songs a new meaning as you watch them learn and arrange them, while dealing with the loss of their membership to death. Geo says it is wonderful.

My wife has seen this and she has been trying to get me to see it. I want to watch it, but my timing has been off. It is currently in the pole position on our Netflix queue, so I will be seeing it soon.

Before I Signed Off

After my interview with George Hrab had ended, I had a few moments left to fill. So, I let everyone know that next week I’d be doing another all music show. This one will kick ass! As always, you’ll need to tune in to be able to enjoy the music, because I am not allowed to archive the all music shows. Licensing rules do not allow archiving. So, be there!

I also mentioned to upcoming 10:23 event. Around the world, on February 5th, people will attempt to overdose on homeopathic sleeping pills. I’m sure the world will be rocked by the mass deaths and hospitalizations…Oh, wait! What am I saying? No one will suffer anything. Homeopathic medicine has NOTHING in it. Not to worry, everyone will be fine.