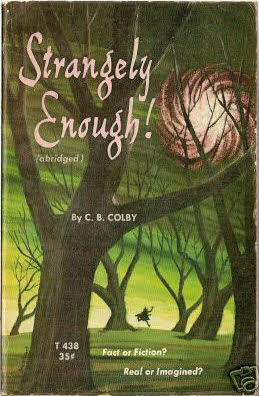 When I was much, much younger I was really interested in (and terrified by) the unexplained mysteries of ghosties, critters, strange visitors, and things that went bump in the night. I suppose this is a common trait of youth. After all, to paraphrase Winston Churchill, if you don’t believe in such things when you’re young, you may not have a heart; and if you don’t cast those things away when you’re older, you may not have a brain. Or, at the very least, you haven’t been taught to think critically.
Well, I was young and I did have a heart. And my favorite book in those days was ‘Strangely Enough!’ It’s an eerie, fascinating, fun collection of short stories of unusual events. Ghosts, UFOs, premonitions, disappearances, buried treasures, weird things falling from the clear blue sky. “Over 80 hair-raising tales to fascinate and intrigue you,” according to its back cover. And that’s only the abridged version!

C. B. Colby, the book’s author, suggested that these stories might all be true. “Fact or fiction? Real or imagined?” are the questions posed on its cover. Of course, I believed them all to be real back then. Many of stories included dates or names of people and places, so how could they not be true? In fact, in my youthful assuredness, I even went as far as to draw arrows on the cover; one pointing to “fact”, another to “real.”

My copy has seen a lot of use over the years. The well-thumbed pages have yellowed, the cover is tattered, half the back cover is gone (don’t worry I still have the detached half, I use it as a book mark), and its spine is quite taped up. I read this book, acquired through the Scholastic book program for a mere 35 cents, again and again and again. One time, when my fifth grade teacher had to leave the classroom for a few minutes, my classmates had me read a few stories from this endlessly intriguing book.

As you can probably tell, I loved this book. I still do. The stories are short and well written. They’re told in a gather-around-the-campfire-children-and-get-creeped-out style. They are quite suitable for campfire storytelling.

The cover of the edition I have is fantastic! Just look at that green hazy night, the nearly black and dormant trees, and that figure racing through the night. Is it a witch? A devil? A lunatic? A frightened villager? And is that ball lightening in the sky? Or, maybe, a flying saucer? I think the cover is a terrific illustration, perfectly suited for the book.

I also learned something important from this book, or, rather, one of my teacher’s reactions to it. Something that I realize now was a seed planted in my mind that would put me on the path toward skepticism.

I think it was during the seventh grade, when I brought the book to school to show to my English teacher, Mr. Raymond. Mr. Raymond encouraged his students to read and would set aside class time for us to read books we’d brought from home. (Anyway, that’s how I remember it.) I was so enthusiastic about ‘Strangely Enough!’ and I had such respect for my teacher that I wanted to get Mr. Raymond’s opinion of it.

I don’t recall how long he held onto the book. It might have been a day or maybe just through that class, but when he returned it to me he gave his opinion. He thought it was interesting, but very probably most of the stories weren’t really true. He told me that the fact or fiction question was most likely a gimmick to make the stories seem more compelling. He also said that, despite the names and dates giving it an air of authenticity, most readers wouldn’t bother verifying the alleged facts.

I’m sure I was a little disappointed by his lesson. However, I know that, in his way, without being too blunt, Mr. Raymond was telling me to think more critically. To be skeptical. It’s interesting how that brief conversation could have such an impact on me later in life. I know now that it’s most likely that the majority of these stories are urban legends, apocryphal morality tales meant to frighten and teach. But, I didn’t know about urban legends when I was a kid.

Imagine my surprise when years later, but still some time ago, I bought a Reader’s Digest publication titled, ‘Mysteries of the Unexplained’. I was still a believer in odd things then and I was stunned to find a story in that book that was of the same event written about in ‘Strangely Enough!’ 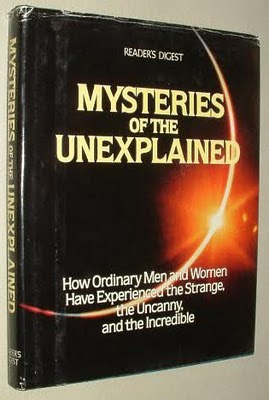 The story was about footprints in the snow appearing overnight and stretching for 100s of miles. This was one of my favorite stories from ‘Strangely Enough!’ and it was one with dates and real places. This was a second source! I wasn’t sure what to think.

I let that corroboration slip from my mind until very recently, when Brian Dunning of Skeptoid.com did a podcast on the story. http://skeptoid.com/episodes/4031 Brian is a skeptic and he’s rising fast in today’s skeptical movement. His podcast and blog are well written, concise, and well researched. Apparently, there was a story reported in the papers of 1855 touting this impossible, seemingly supernatural feat. According to Brian, much of the more incredible claims were “purely anecdotal, unsubstantiated, uncorroborated verbal reports” in the media of the day. It’s a good thing the media of today are much better at vetting stories of the supernatural. Oh, wait. What am I saying?

Some used copies of ‘Strangely Enough!’ can be found on Amazon. You can even get the unabridged edition, but you’ll have to shell out eighty bucks or more. The abridged version is more reasonably priced.

Pick it up, if you like. Bring it along on your next camping trip. And creep out the kids.

One thought on “strangely enough!”