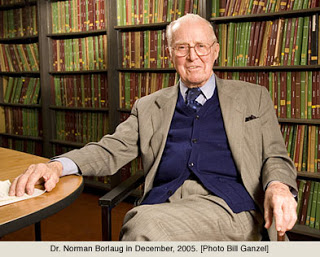 Ok, when you read the title of this installment, what name came to your mind? Plato? Moses? Jesus? Or, perhaps, more recent people, such as…Lincoln? Ghandi? Mother Teresa? Pres. Obama?

Well, any might have been a decent choice. (Except Mother Teresa. She was a sadist taking money from well-intentioned people – including myself! – to build schools to teach others how to enjoy watching poor people suffer and die. But, I digress.) Well, any of them would be the wrong choice. The greatest human being who ever lived has to be Norman Borlaug.

You’ve never heard of him? Neither had I until I watched ‘Penn & Teller: Bullshit!’. In the eleventh episode of their first season, Penn & Teller make the case that Norman Borlaug is the greatest human being of all time, because this Nobel Peace Prize, Presidential Medal of Freedom, Congressional Gold Medal, National Medal of Science recipient is responsible for saving the lives of a billion people. That’s right, a BILLION!

Receiving his Ph.D. from the University of Minnesota (Minnesota! Woo hoo!), Dr. Borlaug went on to use his knowledge and scientific acumen to develop food grains that would grow better in harsh conditions and produce more food to feed the impoverished peoples throughout the world. Not only did he genetically engineer the plants to increase production, but he also made it so the plants would produce more nutritious food.

He’s not without detractors, but their criticism is unwarranted. From what I understand, most of the criticism comes from people who think bio-engineering food is evil and dangerous. Their ignorance leads them to believe that we should only eat organic, locally grown food. The fact that these detractors all have full stomachs and, probably, wouldn’t volunteer to being included in the one third of the world’s population that would have to die in order to go totally organic, should be kept in mind whenever you hear them protest “frankenfood”.

Dr. Norman Borlaug, who died this past Saturday, September 12th, was a giant and we should have a world-wide holiday in his honor.