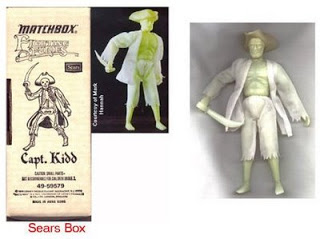 There is one toy, however, foolishly given up in my youth, that has eluded my ability to buy back. It’s an action figure that was put out by Matchbox Toys. It was part of their “Fighting Furies” pirate series and he was called the Ghost of Capt. Kidd.

In 1975, when I was ten years-old, I was looking through the Sears Christmas catalog, something every kid must have done in those days, when I spotted him. There he was, the Ghost of Capt. Kidd. He was pictured with two or three other pirate figures, but I didn’t care about them. I wanted the ghost.

I saved up my allowance money and, when I had enough, my mom ordered it for me. I don’t remember how long I waited, but I’m sure it felt like weeks and weeks.

When the fairly plain and unassuming package arrived, I was beside myself with excitement. It was worth the wait, because it was such a great toy. It had a button on its side that you could push to simulate sword fighting. And though it was a bit smaller than my Johnny West and GI Joe, it had a feature that they didn’t. It could glow in the dark!

To this day, kids dig just about anything if it glows in the dark. Matchbox had the brilliant idea of painting, in pale white, a skull and skeleton on the figure. So, he didn’t just glow, he glowed so you could see his ghostly skeletal structure. It was a very cool and eerie effect.

Glowing in the dark! How cool is that?!

The Captain quickly became one of my favorite toys. I would frequently bring it over to my friend Todd’s house, along with my other action figures, and Todd and I would play with his GI Joe action set and his actions figures for hours.

Once I left the Captain at Todd’s at the end of one of our adventures. I had to go home. I think Todd may have asked me to leave the Captain, so he could play with it some more. Todd was very good to his toys, so I wasn’t too worried about him having one of mine for a while longer. The only thing is is his family then went on vacation. They would be gone for at least a week and I’d be damned if I would be without such a favored toy for so long.

I hatched a plan.

Todd’s house had an attached garage which led to their basement. I knew that his family never locked the garage door (those were the days). My plan was simple: I would head over to his house, open the garage door just enough for me to crawl under, go in, and get my toy.

I’m certain the statute of limitations has long since past, so I can tell you now. My plan worked like a charm. I retrieved my toy and no one was the wiser. I don’t think Todd ever knew I’d broken into his house. And I was single-minded. There was no taking of any of his toys or comic books, no stealing money, no going through his older sister’s underwear drawer (Come on! I was only ten!). I was there for the Captain and that’s all I took. 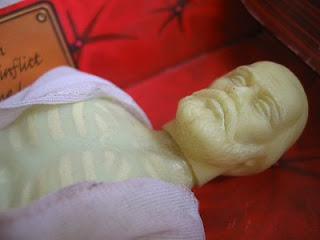 The Shroud of Turin?

As with so many of the other toys of my youth, the Ghost of Capt. Kidd went away. No doubt, sold at a garage sale. How I have grown to regret giving him up.

I’ve never been able to get him back. I’ve seen him on eBay a couple of times and once came close to getting him, but, at the last moment, someone swiped him away from me. Now my money is needed for more mundane things. You know, food, clothing, mortgage. Nothing so exciting as the Ghost of Capt. Kidd.

I just called Mattel and asked if they’d consider reissuing the Fighting Furies, especially the Captain. Toy companies have been known to reissue toys from time to time.

They might. Pirates are so hot right now… in Somalia.