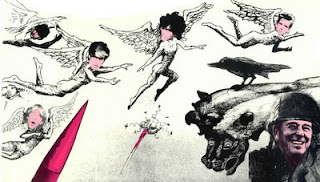 This is it. The last installment of my concert memoirs. I’m ending it with the band I had seen the most of any band I’ve ever seen, the Urban Guerrillas.

The Urban Guerrillas are among the most local of all the local bands I’ve seen. I mean that they didn’t get much national attention. I know they toured around the States, but I think they were more of a Twin Cities phenomenon. But that doesn’t mean they weren’t any good. (I have a memory of them being named Best New Band in the City Pages’ Best of the Twin Cities at some point in the 80s, but I can’t confirm it.)

The band photo (above) comes from the cover of their second album, ‘The Attack of the Pink Heat Seeking Moisture Missiles’. (The title was lifted from a Robin Williams’ bit.) I had to scan the album cover, because I just can’t find any images of the band anywhere online. So, I scanned the cover and put this image together. I made sure to include the picture of Pres. Reagan. I came to think of him as sort of an honorary member of the band. Him and his running mate… Ronald McDonald! 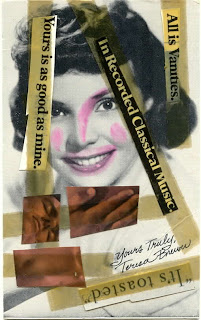 This is the custom art card that came with the cassette of one of the band’s live shows at First Avenue. The cassette is titled ‘Armenian Heat Wave Dance Party’ and it was a very limited release.

Playing a fun mixture of punk, reggae, ska, blues, and I don’t know what else (it’s so hard to categorize these guys), their shows were always entertaining. They had a core of fans that would show up for most shows and have the best time. It was at the Urban Guerrilla shows that John and I learned how to properly slam dance.

Larry Sahagian was the focal point of the band and he was a good front man. He really enjoyed playing and partying. He would often invite audience members to the after parties, wherever they were. John and I never went to any.

Their songs were often times political and sexual. Not always at the same time. Once they were booked to play a dance at a local high school and they stirred a bit of controversy. Their lyrics could be very graphic and when Larry started singing about four-lettering his mother the school principal pulled the plug. The whole incident got a quite a bit of local news attention. Those naughty boys!

There was also an occurrence common to many of the Urban Guerrillas’ shows. Sahagian was never too worried about presenting the bisexual side of his nature during the shows. (I don’t know if Larry is gay, bi or straight and I don’t care. His stage persona suggested he was bi.) He wasn’t on the make for the girls and boys at the shows, he just had that personality. This personality would sometimes make an audience member or two a little uncomfortable. Sometimes Larry would be called “fag” or some such. Larry would usually turn it around on these guys. He’d say, “Does that mean you want to sleep with me?”

As I said, I’ve seen them many times in many places. Here are a few highlights…

In St. Paul there used to be a nightclub called Music Island. It was a pretty lame club and it is no more. It became a Best Buy or something.

One night they had the Guerrillas play. I don’t think the Guerrillas were the sort of band they normally booked, because they seemed completely unprepared for the slam dancing that took place at the show. So, when the punkish fans began slam dancing, the bouncers thought it was a fight and they went in to break it up. Larry tried to explain that the fans weren’t fighting, they were dancing. I remember fans yelling at the bouncers about the same thing. But I think the bouncers won, I can’t remember for sure.

I don’t remember if it was Duffy’s, but I’m sure it was the club that became Norma Jean’s. This show was the last concert at the club before it was to shut down and then reopened as Norma Jean’s, that’s what I remember.

John and I headed down there and met up with some of my art school buddies to take in this last show at the club. The Guerrillas were entertaining as always. However, I think the turnout was pretty small.

The atmosphere was loose as it most always is at a Urban Guerrillas concert. That’s just the way the band liked it. Larry wanted to get high, so he asked if anyone had some pot. Of course, someone did. They brought it up to him, but Larry didn’t want to get the club in trouble so he went outside to smoke it.

There was an outdoor access near the stage, so he took the joint and his microphone outside. The band continued to play while Larry toked away. He would give us the play-by-play and, in his languid manner, would say, “I’m getting high now.”

Larry was quite the showman.

John and I had seen these guys many, many times at the Cabooze. This night, however, would be a little out of the ordinary. Something would go wrong.

I don’t recall how it started, but an argument broke out between Larry Sagahian and the drummer, John Hewitt, that brought the show to a halt. John was not happy. Words were exchanged and he got up from behind the drums and walked out of the club. I can still picture him walking away angrily.

Now drummerless, the band tried to carry on with the rest of the show, but the air had been sucked out of the room. The argument was pretty entertaining, though.

A little background on me is needed for this part. I was never much of a ladies’ man. They just seemed to only want to be friends. I didn’t ever really try either, so I was mostly to blame.

I would get a little morose from time to time, lamenting on my loneliness. And one particular night in my art school years, I went out to First Avenue with several of my friends from school. It wasn’t a concert night, so I wasn’t expecting a show.

While hanging out with my art school friends that night, I noticed that I was the only single of the group. I was the fifth wheel, again! This sent me into a bit of a pity party and I began to mope around a bit. I withdrew from my friends and began to wander around the club.

Then the unexpected happened. The screen over the stage began to lift and there they were, the Urban Guerrillas! I had no idea they’d be there. I was thrilled and immediately took to the dance floor.

I danced and danced and I didn’t feel so alone anymore. I even joined in when Larry had everyone lay on the floor. It was one of only two or three times I’d actually laid on the floor at First Avenue.

It turned into a good night.

Finally, my favorite concert memory of the Urban Guerrillas. It took place at a private party in a warehouse in St. Paul.

Brian was a fellow art student and he had some really good parties at his place. He usually managed to get a big role of butcher paper for the party goers to doodle on. That was always fun to do and it was great when Brian would bring the results to school. We were a clever bunch of doodlers.

For one party, Brian booked the Guerrillas. It was a blast. Dancing right there with the band. They played well into the night and we all had a great time. Well, I did, at least.

“Four o’clock! Stop the bus! Get out in the street and jam!!”

There you have it. The series has now come to an end. I started it nearly a year ago and it has been good to walk through my memories. I wish I had kept a concert journal, but I’m glad for what I can remember.

A short list of bands I’ve seen, but didn’t cover in the series. I just don’t have enough memory of the shows:

There have been others, I just can’t remember them.

I hope you’ve enjoyed this series and that it may have sparked a memory or two for you.