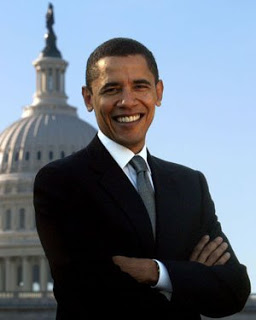 I can’t say that I’m pleased with the outcome of the presidential election. I am pleased and proud that our country, once again, shows the world that we can peacefully transfer power.

President-elect Obama has a tough road ahead. He’s going to be facing a lot of daunting challenges. I’m pretty certain that I won’t be thrilled with his solutions, but I will promise one thing:

He is our next president and I won’t hate him.

I think the hatred and vitriol hurled at President Bush everyday for nearly eight years (he was given a little break after 9/11) is appalling. It’s childish, shameful and mean-spirited.

I have not always agreed with the actions and policies of George W. Bush, but I know this to be certain: he loves this country. Everything he has done he has done because he believed it was best for our country, whether we all agreed with him or not.

If you can’t give President Bush credit for anything, I ask you to take off the blinders and give him this…

By my count, it’s been seven years, one month and 25 days since America has been attacked on her soil. NO ONE thought on 9/12/01 that we wouldn’t have been attacked in the next year let alone seven plus!

The lion’s share of credit is due to the American servicemen and women and their leaders, number one of whom is President Bush.

I know President-elect Obama loves this country, too. And that he will act in a way he thinks is best for America. I probably won’t like much of it (he’s a little too socialist for my tastes), but I won’t hate him.

2 thoughts on “a promise to president-elect obama”