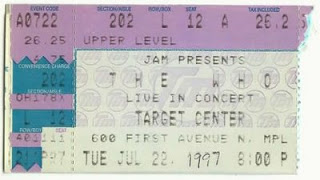 Dave and I were working together in those days. Slaving away at small t-shirt printing shop in Minneapolis. I was in the art department, he was a printer. We discovered we had in few things in common. One being that we were both fans of The Who. We had both seen them at least once before and we were both uncertain about seeing them again if it was going to be another greatest hits tour.

It’s true that when I had seen them at the St. Paul Civic Center (10/2/82) it was a life-changing event for me. And it’s true that it was mostly a greatest hits show. I guess I wanted to keep those memories untarnished by seeing a show of aging rock stars going through the motions (as if The Who ever did that).

Then I heard on a local adult contemporary radio station that The Who would be performing their second rock opera, Quadrophenia. Quadrophenia is the favorite album of most Who fans. There’s just something about that album that gets into every fiber of your being. It’s hard to explain.

Although we opted for the cheaper seats, we were geeked about the show. Working at a t-shirt shop, we were able to make up a shirt with a 100 day (or whatever the number was, I forget) countdown to the concert. Each day one of us would put the shirt on and the other would use a marker to X out the day. What a couple of dorks.

Our seats were decent. A bit far from the stage, but we had a straight shot at viewing John, Rog, and Pete. The good drummer, but a poor fit for The Who, Kenney Jones had been replaced by Zak Starkey. Starkey, unlike his father, Ringo Starr, is a drummer. (Ok, I stole that line from some cable show.) Zak Starkey is an excellent drummer. He’s a great fit for the band.

To flesh out the Quadrophenia story they had some film clips on the big video screens and a couple of extra performers to sing a couple parts. But it was still essentially The Who. Gone were the horn section, extra backing vocalists, percussionist and guests like Phil Collins and Billy Idol. All of which were used for their Tommy tour a few years earlier. They did have Pete’s brother Simon for an extra guitarist and vocalist to take over for John whose voice had gotten too low to be used in concert. And they had “Rabbit” Bundrick on keyboards.

Roger’s voice had aged, but he could still belt out the songs. Pete and John were as good as ever. These guys weren’t just going through the motions. Although the tour may have been put on mainly to get John Entwistle out of debt, the band still had the fire, the passion for rock’n’roll.

The absolute highlight of the night was Townshend’s acoustic solo performance of the song Drowned. On the album Roger sings the lead, but as far as I can tell, when performed in concert Pete takes the lead vocal. It’s one of my favorites off that album. And when Pete performed it that night it was glorious.

He has a power to pull so much sound out of an acoustic guitar. Townshend has said that when John plays he’s like an entire orchestra. I’ve heard the same said for Keith Moon. I say that when Pete Townshend picks up his acoustic and plays as he did that night it’s mesmerizing. Drowned alone was worth the price of admission.

Realizing that I came to The Who late in their career, I was very impressed with the number of younger people at the show. Dave and I were surrounded by many Who fans who were much younger than we. I was further impressed when, during the encore, the band played an acoustic version of Won’t Get Fooled Again and the youngsters recognized the song before I did. Imagine that!

It had been nearly 15 years since I had first seen them in concert. The Who could still deliver the goods. I’m glad Dave and I had decided to go to that excellent show.